Handmaidens of the Home 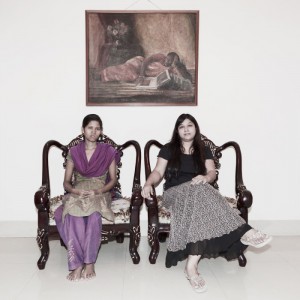 Jannatul Mawa is a photographer currently living and working in Bangladesh. Prior to this, she has spent years as an activist working on behalf of greater gender equity. Her photography focuses upon ordinary lives and interstitial spaces. In Close Distance, she documents the tenuous position of maidservants, women typically employed by the middle-classes and beyond, to help with general household chores on meagre wages. Seated side by side, employer and servant, these images emphasize the awkwardness both parties feel in such close quarters, so very similar and yet so many worlds apart. Mawa writes: “Every day, maidservants take care of the bed and sofa with their hand but they are neither allowed to sit nor to sleep on them once. WIth their domestic role, they are ‘close’ to the middle-class women and ‘distant’ at the same time.” See more here.

The Third Space of Mutiny

On November 5th, 2013, the New York Times reported that 152 men – former members of the Bangladeshi Rifles, a paramilitary border force – were sentenced to death following prosecution over a 2009 mutiny in which 74 people were killed. The uprising occurred after disagreements arose between guards and commanders regarding demands for better pay, ability to participate in peacekeeping missions, and more. This news comes close to the publication of Boundaries Undermined: The Ruins of Progress, anthropologist Delwar Hussain’s first full investigation into the trajectories of post-colonial development, industrialization, and a pervasive neo-liberalism that neuters the revolutionary ideals of generations seeking not only prosperity but purpose and clarity amidst the confusing array of allegiances in contemporary Bangladesh.

Artist, writer, and activist Naeem Mohaimen reviews Hussain’s book, which begins near the still under-construction fence that will eventually reinforce the border between India and Bangladesh. Mohaimen writes:

Hussain weaves in the histories of the multiple partitions of Bengal, and this border site is an appropriate space for considering the human separations and structural inconsistencies set in motion by the 1947 partition, as well as the aftermath of two decolonisation/industrialisation periods – East Pakistan from 1947 to 1971, and Bangladesh thereafter…

Of special interest for Hussain is the excavation of a third-space for identity, as women, rejected limestone laborers, hijras, and non-dominant religious communities work in conjunction. Certainly the mass trials of the former Bangladeshi Rifles, who plan to appeal their death sentence, are a testament to the ongoing struggles amidst the lacuna of revolt. Read more here.