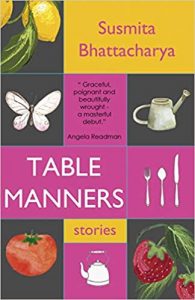 For diasporic writers, home is that nebulous place without borders and boundaries. The question that confronts them always is which experience to bring to the page? That of being Asian or that of an evolving syncretic identity carved of a myriad of experiences? For, conventional wisdom says, write what you know. However, British-Asian writer, Susmita Bhattacharya, successfully thwarts conventional wisdom in this collection of short stories titled Table Manners (Dhalia Publishing UK, 2018). She casts a wide net drawing on cartographies and characters as diverse as the Singaporean Li Xian and the Somalian Hoda. That she does so with dexterity and empathy is what makes the stories plausible.

If there is a leitmotif in this collection, it is that of humanising the ‘other,’ for, the world is still a place where the ‘other’ is observed from a distance as either a curiosity or a threat. Bhattacharya’s craft lies in de-mystifying the ‘other,’ breathing life into her characters with their own individual histories.

There are incisive portrayals of Wales, in many ways still provincial, juxtaposed against the tensions experienced by new immigrants. The oft-heard phrase ‘Are you alright, love?’ can sound alien, even frightening, to a newly arrived Indian bride, wrenched from everything familiar to her, and tenuously embarking on a journey with a man she barely knows. But as Bhattacharya observes in, “Dusk Over Atlantic Wharf,” human beings are remarkably resilient when it comes to adapting, and that the language of empathy is all-embracing. Before long, the phrase is contextualised by the new bride.

Not all stories end with successful assimilation. In “Letters Home,” Hassan, a Bangladeshi immigrant to Wales longs for home as he adjusts to his new life. Writing to his wife, he notes: “But one thing not good about Cardiff. I find out immediately. It is raining raining all the time. Small small drops, like mist. Not like in Dhaka, big fat rain that fall like stones. And so cold, my bones feel like kulfi. I think I am inside a fridge. Muyazzambhai bring for me a big black coat. When I’m inside this coat, I like Cardiff once again!” Oscillating emotions are not uncommon amongst immigrants; the weather, the people and the government can seem comforting at times and cold, indifferent and unjust at other times. Even as Hasan dreams of bringing his wife and new-born son to Wales, he experiences a loss of dignity, and begins to question his place in this new land.

Almost immediately one is drawn to the atmospheric details of Bhattacharya’s renderings. “In the Lap of Gods,” for instance, she recreates the goings-on at a Christian Singles camp, the likes of which are routinely organised by ambitious Christian groups, and whose chief mission is to introduce virginal girls to eligible boys. These puritan values fall through the cracks when the protagonist’s own sexuality begins to unfold, challenging everything that is held sacred. Bhattacharya, one assumes, has no lived experience of such a camp but in fact, she is a Bengali who grew up in the Protestant Christian tradition.

Bhattacharya’s early influences are rooted in the Bengali appreciation of literature as central to understanding life. Her grandfather had an extensive collection of books, everything from fiction to photography, and as a child, she devoured them. Being able to read in three languages – Bengali, English and Hindi – helped immensely.

Pain is the uttering of a universal language and Bhattacharya speaks it deftly; the hauntings of the barren, the estranged, and those condemned to die loom large in the night. “The Taste of Onion on his Tongue,” begins with these ominous lines: “Seven o’clock. As the sky deepens into shades of violet and I wait in anticipation. I take my place at the window and watch the people returning home.” It is the disturbing story of a childless widow whose voyeuristic sexual fantasies involve her neighbour’s husband. Bhattacharya uses the concave black mirror to turn the gaze inwards. The sense of failure that the widow endures (reflecting the trauma of infertility for women) is so complete that she begins to normalise ritual humiliation.

Another fine example of desi noir is the story “Spider.” Bhattacharya exquisitely observes frissons in Old Delhi where the extraordinary dwells amidst the ordinary, and where tour guides can morph into fakirs or royal princes depending on the appetites of foreign tourists. Paula, one such tourist, is led by the dubious tout Mohan, through a city where: “The houses, rather shacks, spilled onto the street, making it narrow and congested. Cyclists, cows, scooters and cycle rickshaws hurtled past each other and the hundreds of people walking in the middle of the street. Here men wore skull caps and lungis, and sported orange beards. Women were covered in burkas and children had dark kohl lined eyes.” The story reaches its climatic end, when Paula learns that nothing, not even individual pain, is private, and that everything can be on exhibition for the right price.

Vivid descriptions of food – cracked eggs dropped in boiling soup, plum sauce on pork, oolong tea, octopus fritters fried in golden egg yolk, prawn pakoras – are woven throughout the book as the link bridge that has the capacity to heal divisiveness, to reach out to the ‘other’, and enable a more intimate understanding of oneself. In the title story, “Table Manners,” the protagonist, a widowed man, is withering and withdrawing from the world. A chance encounter with an elderly Chinese neighbour, and an invitation to tea, rejuvenates his spirits.

It is hardly possible to start reading a story in this collection and stop midway. It is not the ending in these stories that the reader will crave but rather the journey itself, made suspenseful through a profound evocation of geographical space and the character’s place in it.

Selma Carvalho is the author of three non-fiction books documenting the Goan presence in British East Africa. Her short fiction and poetry have been published by Litro, Lighthouse, online Mechanics’ Institute Review (Birkbeck), and Kingston University Press, among others. Her work appears in 12 anthologies and has been translated into the Portuguese. She has received a nod from numerous major competitions, notably as a shortlist finalist for the London Short Story Prize 2017, runner-up for the Dinesh Allirajah Prize 2017 and the Dorset Fiction Award 2018, and winner of the Leicester Writes Prize 2018. Her collection of short stories was long-listed for the prestigious SI Leeds Literary Prize 2018.