In Sneha Sundaram’s Sunshine Blooms and Haiku, nature is at once in the focus and the background. It is not merely an active ingredient but is also interactive. Her chosen form of expression, the Japanese poetic form ‘Haiku’ or ‘Hokku,’ is often a three-lined poem that consists of a fragment in the first or third line, followed by a two-line phrase. Haiku is written in 17 syllables or less and has a juxtaposition of images or a ‘aha’ moment in the fragment line.

Typically, a haiku poet or Haijin finds inspiration in nature and links their thoughts to it. The Haijin observes events around them and writes in plain and common language without any hidden meanings or complexity. The honesty, spontaneity and philosophical possibilities in Haiku attracts many poets from all over the world.

It takes a very special ability for people to listen to nature and Sundaram has that. She mellifluously writes poems about the changing seasons or “kigo” which is a word or phrase that refers to a particular season. The book is divided into five separate sections, each depicting Spring, Summer, Rains, Autumn and Winter. The reader can sense longing, seeking and reminiscing interspersed with cherry blossoms, swans, lotus buds, moons, skies, silences, seas, peacocks, sea bubbles and snow.

In two of her haikus, she writes

to make the first move

In the first haiku, cherry blossoms or ‘sakura’ as it is popularly known in Japan becomes the surprise element adding to the thought of waiting for the poet’s loved one. In the second haiku, a full moment is juxtaposed with cherry blossoms which were probably being ignored in the rush for a quick lunch.

In another haiku, the sound of the sea is captured in the conch.

The conch becomes the epitome of the show don’t tell. ?It gives the reader a chance to feel wonder-struck at nature’s secrets.

seeking in the lotus bud

In the haikus above, an “aha moment” occurs in the last line. There is an image of springtime in the first two lines and the third line surprises us by talking about the mountain goat. In yet another haiku, Sundaram writes:

of a distant home

Juxtaposition of images is used to bring about a sharp contrast. The poem is built in a run-on line and phrase, and then juxtaposed with a fragment. In her Autumn haikus, Sundaram writes, about the last leaf wabi sabi.

According to the Japanese philosophy of wabi-sabi, by accepting imperfections one can make the most out of life. The simplicity and comfort of sitting on a worn-out couch has wabi in it. The “beauty in aging things,” in antique things, and places which tell a story in their ruins as well as the last leaf, all have wabi in them.

I store your memories

of a blooming violet

In the above haiku, Sundaram creates the visual image of memories stored away in a pouch with Ziplock for later use. The haiku is waiting to happen just about anywhere.

Sundaram writes about the various faces of moon – the full moon plays hide and seek behind the clouds, the harvest moon in the porcelain dish, the blood moon among banyan roots, the hunters’ moon behind the ocean and the winter moon when the loved one left.

peaks through the clouds

The full moon shines brightly and peacefully in Sundaram’s haikus; the protagonist looks at them in the sky and is reminded of her loved one and ancestors who are no longer with her. The moon triggers the poet’s longing for love and home. As David G. Lanoue puts it, the night of the harvest moon, the full moon nearest to the autumn equinox, the New Year’s Day and the blooming of cherry blossoms are the most important dates in a haiku poet’s calendar.

Sundaram draws a parallel between the darkness and light and associates it with the moth. The darkness is probably the last night of life for the moth and whether it will reach the light determines its fate.

between darkness and light

In her single line haiku, Sundaram writes wittily that she regrets not laughing more, as she would have been better if she had more crow’s feet on her face; a great way of allowing the readers to read between the lines. On the whole, Sundaram offers a fine ode to the form of the haiku with contemporary and everyday themes. 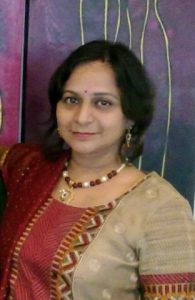 Neelima Talwar is a poet doubling as a Language specialist at Lionbridge Technologies. She has an MA in English from Hyderabad Central University and enjoys writing brevity poems and Japanese poetic forms like haikus, tankas and haibuns. Some of her poems have been published in All Poetry under the pen name, Neel. Her first book of poems was published by Writers Workshop in 2014. Neelima is passionate about water colors and oil painting, travelling and making exotic salads. She currently lives in Bangalore.