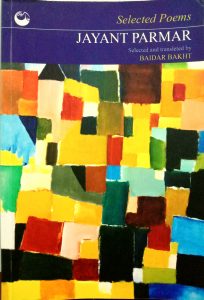 Ghazals— does this word not evoke lyricality, does it not delight you even in its hiraeth? Originating in Arabic poetry, this form of poetic expression has blended in the Indian culture so much so that many Indian poets across various regions have adopted it as a part of their own being and expression. Most of you are acquainted with the Ghazals of Ghalib and now, with Gulzar. But here, in this book, is an Indian poet, Jayant Parmar, writing ghazals in Urdu and winning hearts; soothing eyes with his paintings as well (until you lay your hands on the book, his Facebook timeline, strewn with sketches and snatches of his poems, will reveal much).

You can call him a poet of his times, if you may infer from his book Selected Poems, translated and published in the year 2020. Each of his poems aim at grasping the reality of an event within the frame of a canvas. He states plain facts; not much of his ideas are elusive. But that perhaps steals the essentiality of a poem before you are done reading it to the last, especially when you are already aware of the political situations and the ideas implicated. However, this happens specifically in his poems concerning the atrocities that have been rendered on the marginalized section. The poem, “Thousands of Hands”, speaks about it candidly: “I asked for a home,/ And they/ Buried me in the ground./ I asked for a small patch of land,/ And they/ Burdened my head/ With the rock of exile./ I asked for a morsel of bread/ And they/  Put a burning coal on my tongue.” These lines, as many of his poems, talks about the discriminations meted out to these people in retrospect— that they were denied the basic rights of survival, starting from being deprived of a roof over their heads to a morsel of food just to stay alive. These poems move by leaps and bounds. But I suppose that is what it is meant to do— so that you can witness as it happens or has happened over time, and become a part of it, in the very process of reading it. M. F. Hussain’s horses resonate with that of his own— the swift black steed from his painting that begins the book resuscitates to gallop to its destination, if not by the land, surely by his words inked on the paper.

That quick rush, however, recedes in his Ghazals. Although they deal with the same theme, the tone changes. The protest against injustice remains intact. But here, you’re in for soul-soothing verses. In the poem, “I Chased a Symbol”, he feels delighted in a moment’s respite from the symbols of nature: “…Everything was lost in the sand./ And suddenly,/ Moving aside the curtain on the window,/ A tiny colourful butterfly/ Came and sat on the lapel of my jacket.” Poetry and his own self are made for each other; they belong to situations and places that hold the potential to exist in places where terrible events of the past can be reversed at his will. So, you will find not just pictures of social discrimination but also the ability, and the will to rise above them. We come to believe that he, as a spokesperson of his own self as well as his class will rise out of the ashes, like a phoenix, to be re-born again. He is proud of being a “Dalit Poet”. And, his Ghazals give room to ample picturesque scenarios for that to happen; poems like “Nainital” are illustrations of such serenity. Much respite awaits the reader in “A Ghazal”, which acts as a sort of messiah to him and to our mind: “You filled it/ with seven colours:/ The page of my heart/ was ever so pale”— when fear had overwhelmed him.

You are more likely to come across odes to many famous poets and artists of the past like Octavio Paz to Post-Impressionist painters like Vincent Willem van Gogh and Paul Cezanne. His acknowledgement of their works points to contradictions— that, even vibrant colours within a still life, can create the effect of a melancholic disposition, on the corollary, to the inherited loneliness and blackness that he executes in a series of poems with black imagery— “black wings”, “black birds” (who want to shed their darkness and scarred bodies and break free from age-old chains of stigma and fly high into the sky), “black horses”, “black grass” and so on and so forth. All that blackness induces a somber mood like the interpretation of human suffering in van Gogh’s paintings. As with him, so with Jayant Parmar: their art, while being inseparable from society, are a sort of refuge from the turbulent chaos. But if you ask him about the roots of his poems, you’re in for a surprise. His own pencil doesn’t stand as an independent entity. Its existence for the poet, Jayant Parmar, serves to bridge the gap between the present and the past. The continuation of generation serves as vantages of beauty among much turmoil, from the aroma of Ghalib or Gulzar from the East to the madness of the West. There are themes in them that either haunt him or delight him. A gullible persona that he assumes in his poetry is that of a naïve child. He will say that a little bird gets him the pivotal elements required for poetry: “The sparrow also brings/ A bit of the sky/ And some raw material/For my poems.” Yet, the tension that generally prevails in the verses is stripped of all fantasy. Even as they retain the colourful palette of nature, the poems are laid out before you, in flesh and blood, as you’d see the real world, with people who have it intact with places, and things, and beings reflecting an anti-romantic sentiment.

In the collection of poems, “Pencil aur dusri Nazmein” in his book of Selected Poems, the daughter in the poem “Pencil(3)”, carries forward the legacy of willful innocence. Like him, she too draws “Black birds” yet her mind is brimming with naivety. Her pencil sketches are more than just blackness— a peacock wears goggles— innocence blends with ambition as she goes on to draw next, “a tiger chatting with a cow”. In her world, she forges brightness of her own making. But the nib of her pencil breaks when she is forced to conform to the societal norms; she urges to break free from the cage and becomes violent in that process which is put through a lengthy metaphor of the legacy of blackness, inherited from decades of impositions: “The school master/ Gives her some homework,/ My little doll/ Breaks the tip of the pencil/ In anger,/ Extinguishing the candle of the pencil./ The white sky of the paper/ Is left with only dark smoke.”

While social injustice is an essential part of his identity and that of his entire class, he re-invents the filiations forged by the upper wrung of the society. But by no means does he feel estranged from his nation nor can we locate any form of dislocation emanating from his verses. He is more than in love with the people and places around. Countless other authors writing in the vernacular have expressed a crippling sense of alienation from their surroundings, from the people who have relegated them and their class to blackness. At the end of the line, the poet knows that even if his audience deserts him, his poems “Will never refuse/ To listen to my woes.” The entirety of Jayant Parmar’s Selected Poems relays the same emotions. What can make the poetry collection accessible to all kinds of readers is beautifully simplified version in the English translation rendered by Dr. Baidar Bakht, who doesn’t hesitate to retain the lyricality of the Ghazals. For readers, who aren’t very well-versed with the Urdu semantics of the Ghazals and Nazms, this translated book, with its introduction by Gopi Chand Narang, makes it all too feasible. 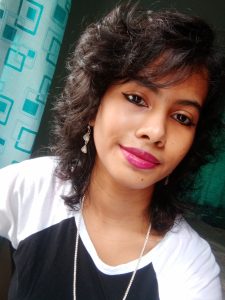 Rachita Swain lives in Bhubaneswar and is an MPhil scholar in the Department of English Literature and Language at Utkal University, Odisha. Deeply interested in Bhakti movement and literature, her present thesis is on its application and influence in Contemporary Indian English Poetry, specifically, Jayanta Mahapatra and Arun Kolatkar. She writes poems and aspires to publish a book soon enough. Her articles and book reviews have been published in local e-journals.