Joan Roughgarden is an evolutionary biologist, ecologist, Emeritus professor at Stanford University, and an adjunct professor at the Hawaii Institute of Marine Biology. All this is evident in her writing. Ram-2050 is fiction written in an extremely non-fiction prose based on the Ramayana. It’s an epic rewritten for the future, and it is more of a retelling of the story than a reinterpretation.

Roughgarden was drawn to this ancient 24,000-verse epic for an unlikely reason. In no other mythology is there such a blurred separation between people and animals—Ram and his army of primates are unlike any other army in the world’s epics. To a scientist, this smacks of biotechnology.

This is a science-fiction tale that attempts to distance itself from its religious predecessor—the reader has to keep this in mind when he embarks on reading this book. There are no kingdoms, only corporations. There are no Brahmins, only geeks. Ram’s virtue comes from genomic intervention. Roughgarden’s contention is that virtue can be genetically engineered—maybe science can take humankind where ethics cannot.

The story starts with Das and his anguish at having no future CEO to run Apple. Is there nothing that app coders can’t fix? They convene to create a product: a son, of course, and the blogosphere is ecstatic. The created avatar has a fraction of the genes from every race of humans and animals —genetic manipulation is the alchemy here. Besides creating affinities across species, the product avatar is stem-cell engineered to prevent injury. In spite of all the technology, you would think that Das’s son would have a CPU for a brain; but no, ethics does not permit it. One thing Ram can’t escape is obsolescence.

While Ram grows up with a sense of responsibility toward all living beings, Ravan is the villain of today—a currency manipulator, an introducer of Trojan genes, a social disruptor of the highest order, and a morally bankrupt criminal. He imprisons the poor, profits from poverty, and exploits social media for his own gain.

The start is impressive. The problem is that while Roughgraden approaches Ram’s genomics with a biologist’s curiosity, the plot is not re-engineered at all. She substitutes Ravan with a leader of a syndicate. If in the epic, Ram is banished to the forest, in 2050, Ram is ousted as CEO of Apple. He is forced to live like a geek in the jungles of Hawaii. This new take on banishment is absurd for someone who has read about Ram’s travails in the forest; but times have changed, and banishment could take on a different meaning to a contemporary individual. Roughgarden portrays banishment from the Apple palace to live like a geek in the jungles of Hawaii as an extended hiking holiday, with opportunities for going organic, owning bioelectric cats, and using solar energy.

All this seems to be too simplistic and substitutional. You would expect Das to make a more pragmatic decision in 2050, considering that Ram was created to become the CEO. It is beyond logic that Kaila’s threats coax Das to oust the very product that he engineered. Even after the war, wouldn’t you expect the newly engineered Ram to accept Sita? He does not. Instead of purity, what’s at stake is Sita’s supposed role in corporate espionage.

Roughgarden’s writing is very technical and lacks the flow of mythical stories. As I read this version, I realized yet again how marvelous the storytellers of yore had been.

What Roughgarden lacks in literary flourish, she makes up in her original ideas. Ram uses the period of his banishment to understand animal communication. In her world, women are in control of their ovulation, so they are no more at the mercy of biology’s tyranny. They have what are called reproductive rights. Her ideas are a revolutionary take on sexual selection.

Roughgarden frames the plot of the epic in the garb of science fiction but she also makes the reader think about man’s precarious relationship with other species and about genetically-engineered ethics. On the other hand, a recent retelling of the Ramayana by Samhita Arni called The Missing Queen takes the Ramayana where it has not been. The question starts with Kaikeyi—why was Kaikeyi the way she was and what really happened to Sita? These questions make us look at existing stories with contemporary eyes. Ram-2050 marries cutting edge science and mythology but because the story sticks to the original plot, this rendition does not somehow fulfill its potential. Read Ram-2050 if you are fascinated by ideas and do not care for literary style. 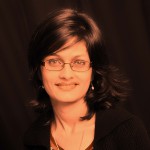 Neelima Vinod has two published books and has contributed literary articles, interviews, book reviews and poems to several publications. She works at “Pothi.com in Bangalore, and steals time from her job to read books and write poetry. You can follow her on twitter @neelthemuse.