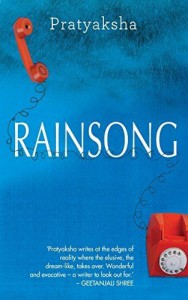 Rainsong is a collection of short stories by Pratyaksha, translated from Hindi by the author herself. To my mind, it is almost like reading thoughts or viewing dreams through the written word. It is like a palette of vivid colors. These pieces have strong visuals, portrayed through vignettes of imagery, feeling, nuance, or scene.

The stories are arranged in nine sections: each section has one long story and two or three shorter pieces of similar theme. The author compares the layout to a plate of food: the short pieces are like hors d’oeuvres, adding piquancy, aroma, and flavor to the main course, which is the long story. The prose does not lose its authenticity or beauty in translation.

In “I am in love,” a woman finds the telephone number of an old lover or friend and calls him. As he speaks to her, his loneliness, sorrow, and desperation tumble out.

In the title story, “Rainsong,” the writer gets a phone call from a mysterious woman named Rain every night. Her voice reminds him of all the things he wants, or has lost, in his life. He dreams of this voice, and it takes him back to his childhood years. It reminds him of his mother’s voice.

‘Somewhere in a faraway playground, amidst an intense childhood game, my mother’s voice would come floating across, soft and inviting, laden with the warmth of the kitchen, the aroma of freshly baked rotis with hot ghee melting on them, and the sweet smell of Ma’s sweat and talcum powder.’

His loneliness makes him yearn for company, but his solitude is the source of his creativity. When asked about the characters closest to her heart in an interview, Pratyaksha mentions this writer as one of her favorites. She says, “He perceives the world with a childlike wonder and innocence… the creative anticipation that catapults you into a space of blue lights and smoky whispers, of kaleidoscopic colors and vibrant music. He is a bit like anyone being in the ‘Lucy in the Sky with Diamonds’ state of mind.”

“Black Crow Woman” is a complex story. It is written like a lucid dream. A young woman’s thoughts and desires spill into her secret diary. The story moves from character to character, until the reader reaches a point where it is impossible to tell if the woman is talking about her father or her lover. She loves her father intensely and sees her mother as a thorn between them. Her mother, beautiful and seductive, is the object of her jealousy. She explains to her partner:

‘You never met him. You will never understand. You can’t see the child who sees the world with star struck eyes from her father’s lap. And not that woman who becomes a mother to her own father. How will you understand that he is in my blood and marrow, like I was in his.’

This story made the strongest impression on me, especially its treatment of the complexities of growing up and discovering one’s sexuality, the strong attraction to one’s father, the jealousy for the mother, the realization that parents are eventually just human beings, full of flaws, dreams, and expectations.

Not all the pieces in this collection can be defined as stories. Pratyaksha herself describes them as visuals, like paintings. Her style is impressionistic, the “fast-moving pace creates an impressionist image. It is blurring the reality, smudging the lines so that the scene merges into another and when, hopefully the reader is done, he will carry a taste or a visual of something that is not overly definable.”

This collection need not be read cover to cover, as I feel there is no continuous narrative one needs to follow. Rather, one can dip into it time and again for the poetic language and the unusual imagery, and leave the need for reasoning behind. The complexities of the stories reveal themselves in little nuggets and can be digested in small portions. I found that while some pieces feel a bit overworked, perhaps to achieve a touch of magic realism, most of them conveyed a sense of poetic escapism into the fantasy world of the characters in the book.

The collection has been rightly described as a plateful of food. Take what you enjoy and leave out what you don’t. But the overall experience is very satisfying.

Pratyaksha, the chief manager finance with Power Grid Corporation, is an award-winning writer who has previously published two collections of short stories in Hindi, “Jungle ka Jadoo Til Til” and “Pahar Dopahar Thumri”. Her stories have been translated into many Indian languages. She received the Krishna Baldev Vaid Fellowship in 2013.

Susmita Bhattacharya was born in Mumbai, India. She received an MA in Creative Writing from Cardiff University and has had many short stories and poems published in the UK and internationally, been nominated for the Pushcart Prize and broadcast on BBC Radio 4. The Normal State of Mind is her debut novel. She lives in Plymouth, UK with her husband and two daughters. She facilitates creative writing in the community and blogs at http://susmita-bhattacharya.blogspot.co.uk. You can follow her @Susmitatweets