Quichotte, Salman Rushdie’s tribute to Miguel Cervantes’ seminal literary comedy is far from being merely inspired by it. Featuring a story within a story, Quichotte mirrors Don Quixote in numerous ways– from wielding metafiction as a literary device to retaining the names of the characters. Yet, Quichotte doesn’t out-do its inspiration but stands in the shadow of its near-namesake, lacking in impact, as if its skeleton simply cannot carry the flesh of its object. 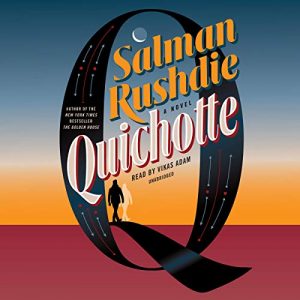 The story follows the adventures of a traveling salesman who is enthralled by American television. So intense is his obsession that he begins to believe that he belongs on the other side of the screen – with the sparkle and brightness of the American screen. One person stands out among the many characters in the cinematic productions he enjoys: Salma R – a celebrity television host. Quichotte embarks on a quest, and brings along a companion; his imaginary son Sancho.

Quichotte is a read that either beguiles or puts you off instantly. To delve into the pages of the book and follow the travels of Quichotte is by no means a bore. However, the monotone voice, bordering on sarcasm, fails to draw one in. What could have been an enchanted expedition comes off as a ridiculous pursuit. While in essence the expedition is one that calls for derision, Rushdie takes away from the readers’ ability to enjoy this quality of the narrative by assuming a subtly condescending tone.

Rushdie applies pop culture references in his narration and uses terms such as “cray cray.” Whether this is an attempt to engage younger readers by adapting their style of social media slang or a novel approach to writing, the language used is quite different from what one typically expects from Rushdie. Rushdie’s nearly experimental style in using such language lacks allure. In addition, there is a dullness of tone. Reading aloud, it made me feel like I was orating a Twitter feed from a third person’s point of view. It is ultimately a matter of personal taste, but the magic of story writing and books is diminished when authors resort to texting parlance, as done in Quichotte. It is in the vast difference between these two ‘styles’ that language flourishes, allowing to be bent to accommodate everyday conversations and molded into magical prose that leaves one entranced.

One enjoyable aspect of the book is the chronicling of racism, which is still vastly prevalent in the United States. The book makes references to celebrities we are well acquainted with; Elon Musk, Oprah, and Trump: perfectly capturing the life we experience in all its existential ludicrousness. Perhaps the inconsistency of the prose was designed to reflect this? Even so, the book is a woeful representation of the altogether messed up world we live in. As a book, Quichotte is an artful jumble. It is layered to almost infuriate and packs a steady switch in timelines challenging the reader to go above and beyond their capacity for reason and logic.

Rushdie does a good job in connecting with his readers through the inexplicable experiences he narrates. And, though there are elements of Quichotte that are silly, even frivolous, it is ultimately the sweet story of a hopeless romantic and a loving father. Nevertheless, the journey of the traveling salesman in pursuit of love leaves the reader with a superfluous weight that cannot be fully shaken off.