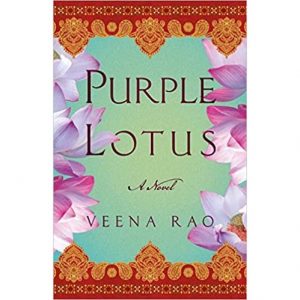 The Buddha famously said, “No one saves us but ourselves. No one can and no one may. We ourselves must walk the path.” In Veena Rao’s debut novel Purple Lotus, we see such a path unfold for Tara as she journeys towards self-discovery and empowerment.

The lotus is a well-known symbol of purity; it rises from murky waters but is unsullied. It is also the symbol of following your path, your dhamma. A purple lotus is especially known as a symbol of wisdom and dignity. But Tara of Rao’s novel has a long and bleak journey before she can reach a place of wisdom and dignity. Shorn of symbolism, Tara is a girl entangled in her own sense of grief, as also yet another girl trapped in a patriarchal society.

The book begins with little Tara losing her doll during her family’s move to Mangalore. In trying to cope with the loss of the familiar, losing her doll turns out to be deeply traumatic. This is underscored by Mark Twain’s quote that the novel opens with, on how loss of a toy for a child and the loss of a throne for a king are similarly painful.

Tara’s sense of abandonment is further deepened as her parents leave her behind with her grandparents and a schizophrenic uncle. They do, however, take her brother with them while little Tara is too young to grapple with what it means to be a girl in a gender discriminatory society. As Tara grows up, her respite are books and her time with her uncle on his good days. When she finds that Cyrus from school likes her, life suddenly feels a lot more bearable. But then her parents come back to claim her, and she is yet again torn from what she has come to regard as home.

Much like Rao herself, grown-up Tara finds journalism to be her calling. Soon she begins writing on women empowerment even as she herself, ironically, is pushed into getting married by parents who find her getting too old to be marriageable. Her marriage lands her in Atlanta three years after waiting for her husband to get her to the US where he works. In these three years Tara has endured constant questions and pressure from family and friends, and so even when she realizes she is trapped in an abusive marriage, her family insists that she stay on and make it work.

Even as Tara’s life continues to unspool in an ever-deepening spiral, it is her silent strength that is uplifting and heartbreaking at the same time. Her strength is not of one determined to be brave but one cornered in a blind alley. Through it all, she clutches at every little thing that comes her way: even the time with her husband before he reveals his abusive side. Just as she clutches at every little lifeline she gets tossed along the way—whether it is working as a cleaner, learning new skills, or modeling. There is no one easy way for Tara and her struggles resemble those of many other women who find themselves in similar situation. In Tara’s challenges, such as with learning to drive, Rao takes the opportunity to share experiences which would resonate with every immigrant woman. Finally, Tara finds friends in local Indian and American community and leaves her husband.

Life finally takes a turn for her when she accidentally meets Cyrus and they marry. Love had finally found its way in Tara’s life, but what should have a period of contentment in her life yet again remains elusive. Her old fears continue to beset her, and she returns to India to hibernate. Except that this journey home also turns out to be a journey into her past and she finally confronts her sense of loss.

Life comes full circle for Tara in a swift arc when she finds her doll, only to let it go. It is in placing the loss of a doll at the center of Tara’s journey that the story comes closest to its symbolic bearings. While every other trauma was inflicted from outside, this gnawing loss had been Tara’s own. Buddha also said, “Pain is certain, suffering is optional… One of the hardest things to do in life is letting go of what you thought was real.” In letting go of the doll, Tara also sheds a lifetime of trauma.

At once a universal theme as well as one that is specific to the Indian society, Rao’s book is essentially a story of survival and empowerment. For a book invested in these themes, the book reads remarkably like a pebble drop in the silence where the author is present only in the quietness of the book.

Rao says she spent much time polishing the draft, and it shows. A richly narrated book, it is a far cry from the crisp style of journalism that has been Rao’s work so far. The writing style keeps pace with the storyline. The haunting quality of Tara’s past is a sharp contrast to the immediacy of her present, just as it turns mellow after meeting Cyrus.

Having spent many years in Atlanta, Rao’s book does not stray far from this known location and is richer for it. Mangalore and other areas in the book also bear a similar stamp of familiarity.

Women empower other women, and Tara’s journey too would have been incomplete without the friends she finds in women around her. From strangers pitching in with everything from advice to shelter, it is this sisterhood that carries her through her darkest hours and becomes an important theme in the book.

“Not all monsters are egregious. Some stay hidden in plain sight. They wear a normal mask. They don’t set you on fire. They crush your spirit slowly, until you die every day, from loneliness, purposelessness, worthlessness, hopelessness… I was expected to exist for society. I chose to live. To love. I take heart in the knowledge that the monsters around me do not sully me, because the names they have for me are not the names I give myself.”

Rao chose to give her the name of Tara, the Buddhist goddess of liberation, and by the time the book ends, she is well on her way to healing and becoming whole. As her uncle Anand had told her, “The whole of the universe is inside you. To rule yourself is to rule the world.” 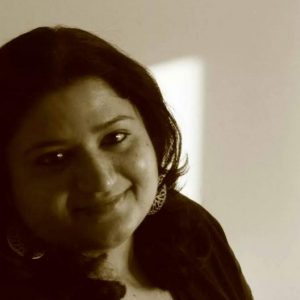 Pooja Garg is Founder Chief Editor for The Woman Inc., an advocacy and literary magazine. She also works with Raksha, a nonprofit working for survivors of violence, and Khabar magazine.