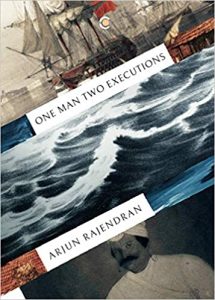 To read Arjun Rajendran’s fourth collection of poems is to simultaneously surf through unexpected seas and flawless sails. One Man Two Executions is certainly long, but Rajendran’s conviction remains strong as the ship voyages in the rough currents of the Carnatic Wars of the 18th century, French-occupied Pondicherry.

The 12 hefty volumes of history by Anand Ranga Pilliai (a dûbash, an interpreter to the French governor of the time, Joseph François Dupleix) becomes the anchor to the first section on Pondichéry. Rajendran chooses succulent details—like that of celestial comets, or the inflammable begum resting near the bills of lading and mouseholes—over the dry bones of history and marinates them with his anachronistic imagination.

Carving poems out of history might appear easy but is not necessarily so. One has the material and metaphors to work with, characters acting from their contradictory motives, rib-tickling superstitions of locals, and most of all, a visible and brutal conflict. While most of the historical poems try to highlight the vanity of war and the uselessness of the bloodshed, they cannot achieve the desired effect or convey their magnanimity to the readers, without an infusion of imagination, poetic diction, and artful compression.

That is where historical poems can be challenging: you have 20 lines to accommodate multiple weighty tomes of details, images, and characters. Rajendran recalls in one of his interviews that each of the poems in the section took him close to a month to write—”[p]eople who read [his] initial poems found them dense, so [he] realized that [he] needed to go easy on the history.”

The poems in Pondichéry depict a world largely dominated by fluttering masts, schooners, lascars, pirates, and their contradictions. As the scenes unravel, we witness characters behaving eccentrically. In the titular poem, One Man Two Executions, we see an adamant priest, who ignores the sacred intervention of breaking off of the noose and orders for another hanging: the priest/(foaming against custom)/condemned/the condemned/soul to a second hanging,/his epitaph,/a palimpsest.

In the next two sections, ‘The Girl in the Peapod’ and ‘Were it Not For’, Rajendran deals with a variety of themes, but love and loss stay as a recurrent idea in these poems. Though these poems are not historical, his references to the Soviet Union connect personal and political flawlessly: what all strong metaphors should do. (Your spine—/its Soviet bent, published/in a Moscow before perestroika.) Another poem ‘playing truant’ juxtaposes the death of a personal dog named Laika ‘whose name killed her more than the trash she’d eaten’ due to the crumbling of the Soviet Union.

I particularly liked the poems where Rajendran uses his experiences as an editor to write poems with deadpan humor. In ‘Editing’—the last poem of the book—he produces jarring combinations of a and the, draws out on the common editorial suggestions of not repeating words in close succession, of not ending lines with prepositions, etc. Through the whole poem and few others (‘Editing You’ and ‘Publishing’) from the second section—dealing with the similar issue tangentially—Rajendran comments how technicalities can become robotic, how some ruthless editors edit out emotions for a well-crafted, and perhaps mechanical, poem.

Though grief remains as an undertone in most of these poems, Rajendran’s unflinching portrayal of death in ‘Carousel’, ‘How They Went’, ‘Ferris Wheel’ makes a reader vulnerable. He clings to the pain desperately and mourns publicly, trying to cope up with his loss. These poems remind me of what Borges said: ‘We forget that we are all dead men conversing with dead men.’

In ‘Carousel’, he says: One time, I held onto/a Siberian Husky on the Ferris wheel, counting/his last breaths. Counting can be a prayer. Enduring a terminal illness is to have a gun pointed at you, but nobody to pull the trigger. There is the anxiety of death approaching, hopelessness, and suffering What should one ask for—an agonizing life or a peaceful death. The prayer becomes a dilemma.

Rajendran’s poems present slivers of ideas which he leaves for the reader to string into a cohesive whole. This is perhaps, like the Zen story, where the monk explains that knowledge is a vast river, and the disciples can fetch water as per the volume of the vessel they bring. These poems demand a meditative eye, annotations, and re-readings for them to yield to you. These poems, very much like the sea, keep expanding as soon as the reader thinks he has come to the end of the book.

With his second book, The Cosmonaut in Hergé’s Rocket, Rajendran’s poems take a flight into the future with the planets, rockets, and the universe as his motifs. Get ready for time-travel, as his new poems navigate through the choppy waves of history. 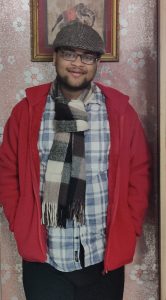 Kinshuk Gupta uses the scalpel of his pen to write about his experiences as an undergraduate medical student. He was longlisted for the People Need Change Poetry Contest (2020) organized by The Poetry Society, UK. His haiku have been nominated for the Touchstone Awards and the Red Moon Anthology. His work can be read or forthcoming in The Hindu, Modern Haiku, Haiku Foundation, Contemporary Haibun Online, among others. He currently works as the Poetry Editor for Jaggery Lit.