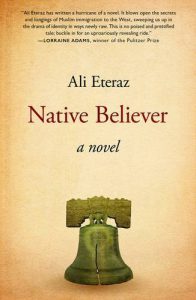 Native Believer, published by Akashic Books in April 2016, is a debut novel by Ali Eteraz that explores the identity of a secular American Muslim in Philadelphia. It’s no longer the “PBL” or the Pre-Bin Laden period. The going is tough for the protagonist M, a second generation immigrant poet in his thirties. M is a great host, a smooth talker and very much in love with his wife Marie Anne, a Southerner with hormonal upswings and weight issues. Her continuously changing body gives an inkling of the impending theme of change and transformation in this story. M was “a man who ate the West, breakfast, lunch, and dinner.” Religion was something as foreign to him as Bollywood, but not for long.

M’s boss changes the tenor of his ordinary suburban humdrum existence. Looking at M’s bookshelf filled with works by German authors, he is adamant to have a look at the book on the top of his cupboard. It was a Koran that M’s mother had given him and that he had paid little attention to.

“I’m just noting,” he said, both hands up, but with a smile on his face, “that without thinking, you put the collected works of Muhammad above the collected works of Nietzsche. A theist over an antitheist. The Prophet of Arabia over the Devil of Bavaria. I’m just asking if that was an expression of some residual supremacism on behalf of the Koran.” (p. 25)

Eteraz writes with flair and slides from humor to embarrassment, sex, and memory so easily. He explains prejudices with finesse. M was apathetic about his identity as a Muslim until his boss inferred that there was something residual in him. It’s not that he hadn’t faced prejudice before; prejudice being an inevitable part of multiculturalism, what M calls a “recipe for estrangement.”

“My destruction lay in the fact that when other Americans washed the ash out of their eyes and took a look around, they saw in my swarthy face a reminder of all those golden years eclipsed by the thief who had stolen the key to El Dorado, the brother of the devil whose whispers brought Paradise to an end. It was a testament to my fellow Americans; actually, that calling me a residual supremacist was the worst they had done to me. They could have tarred and feathered me. They could have hung me upside down like a bat in Guantanamo.” (p. 68)

The narrative is humorous but terrifying as well. Imagine being plagued 24/7 by a society that has stereotypical ideas about who you are, and by surveillance ousting and the reality of your middleclass life. M has a breakdown. He loses his job for no clear reason except that he is a Muslim. Conflicted, he roams the surreal underbelly of Muslim America where he comes across all kinds of outlandish characters enmeshed in the cycle of sex, violence, and money. He trips and stumbles through this dark phase but continues his search for the answer to the crucial question of what it means to be a heterodox believer in times like these.

Eteraz is a brave writer whose narrative immerses you in a world of fear, doubt, identity crises, and paranoia. He exposes the mind of the American citizen separated from the norm because of who he is, was, or could be. Native Believer is a relevant book and should be read for its fine prose. Other books by Eteraz include a memoir, Children of Dust (HarperCollins), and a short story collection Falsipedies and Fibsiennes (Guernica).