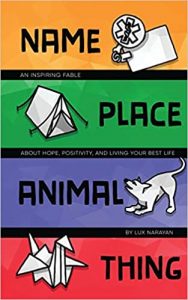 My favorite chapter in Name Place Animal Thing, Lux Narayan’s highly practical how-to on keeping spiritually fit and mining meaning out of the drabness and ennui of modern living, is titled ‘Animal.’ It opens with a confession from the narrator. “I knew that there was a connection with my physical self that had, so far, eluded me,” they say (the narrator is gender-neutral). This struck me for two reasons, the first being that this very personal admission provided an insight into the narrator’s state of mind, but applied broadly, it revealed a mystifying gap in our own existences that goes too easily unaddressed. Where, in our bodies, are our selves, our feeling, wanting, thinking personas? When it comes to our bodies, we dress, undress, or seek redress when we are in physical pain. But what beyond that? The book does not pretend to provide answers; instead, it offers ways of engaging within and without our distracted, hyper-put-upon lives, to help answer this question and other big picture queries.

Narayan’s insights are framed in the context of a popular alphabet-based trivia game played with pencil and paper by elementary school kids in India–in all likelihood it’s been booted out by smartphones–and this is also the title of the book. I played  ‘Name, Place, Animal, Thing,’ on bus-rides home from school with my friends, during the infinitely un-stimulating ‘80s (compared to any year after 2000) when it was not only acceptable but cool, to shout answers across the seats, while the wind tugged at our ponytails, knowing, but not admitting that ‘Djibouti’ with a ‘D’ was a more erudite choice of ‘Place’ than ‘Delhi.’

To practice and personalize NPAT–by creating one’s own ‘MyNPAT’ as the author exhorts us to do at the end of the book–one might have to channel a quieter state of mind. Name Place Animal Thing does this almost immediately, delivering bite-sized nuggets that tease the depths but do not drag you down, in a light, engaging and superbly readable voice. The innovation here, though, is that Narayan’s insights function like darts to be thrown anywhere on a broad canvas of ambition and ability; you can lowball or highball or put his suggestions into practice somewhere in the gorgeous in-between, but, if you truly engage with your choices as they are, you will likely discover the elusive contentment that dodges many of us who rush to be fulfilled. Narayan’s book emphasizes action–actions that are tiny and incremental, or singular and momentous in scope. Think of action on a spectrum of creative work, from as small as crafting a paper boat, to as ambitious as crafting a novel. Both are available to the reader to choose from as creative acts of self-determination and healing, but though we might attribute far more value to the novel over the paper boat, the satisfaction we can derive from these acts is intrinsic and independent of how we are taught to view them.

Narayan arrives at these insights through a seemingly simple but elegant process that he reveals through riddle-filled and gently humorous conversations between a group of mid-career men and women who are also close friends: the sub-text of NPAT is bonhomie, and goodwill. He identifies a problem, a big, sky-wide problem, like how to place your mind and soul (or locate your inner animal) in your skin and flesh. Next, approach the problem in a way that makes it manageable and down-to-earth. Finally, pinpoint a DIY, usable solution that can be mapped out in words, catchphrases (travel near and narrow stuck with me), and hand-drawn graphs (the book is littered with them, so much so, I wondered how much of it was written on a computer versus on paper napkins and scraps — until I read the epilogue and learned that the author wrote this book on ‘planes, trains and automobiles’ over several years and at least one rewrite). The book’s illustrations give it a rare authenticity. Tuck these into your pocket or a corner of your mind and go forth and BE! This is not to be reductive and trivialize the myriad micro-solutions that Name Place Animal Thing offers. Rather, it speaks to seekers of every stripe.

Narayan takes liberal helpings from great minds like Daniel Kahneman and Kurt Vonnegut, and the Japanese philosophy of Ikagai, crediting them throughout his book. His adaptations of their ideas are original and transparent. He does the work for you, drawing parallels between, say, finding satisfaction in ‘making’ things (think a paper boat that floats successfully) and Vonnegut’s famous shape of a successful story. Different endeavors that can be mapped to the same graph—including a final and delightful blueprint-for-growth sketch inspired by Da Vinci’s Vitruvian Man, no less. Prior to writing the book, Narayan ran a successful social media marketing start-up. He is a licensed non-commercial pilot, and a stand-up comic. You do not have to be a polymath to appreciate NPAT, but, as he himself appears to have done by completing this book during a pandemic, there are times when no one surprises us more than we, ourselves. 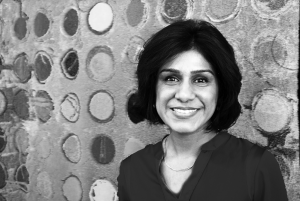 Reviews Editor Mary Ann Koruth’s writing and reviews have appeared in The Indiana Review,The Rain Taxi Review of Books and The Hindu. She has written for TheAtlantic.com while interning as web editor, and has covered art and culture for other publications. Her love for the English language came from growing up in a family where fidelity to literature and grammar bore a moral dimension. She is currently a candidate in the Rutgers-Newark MFA in creative writing.