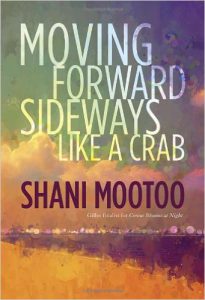 Shani Mootoo’s 2014 novel Moving Forward Sideways like a Crab is quietly touching, written in lush and exquisite prose. The novel’s protagonist is author Jonathan Lewis-Adey who, as an adult, attempts to find and reconnect with his other mother, Sid. Jonathan has not seen Sid since he was ten. Jonathan’s desperate search takes him from his home in the dreary winter landscape of Toronto to Sid’s native island of Trinidad. There, he discovers that his beloved Sid has become Sydney, now a man and enigmatic stranger. Over the course of the next decade, parent and child attempt to rebuild their relationship. However, Jonathan still yearns for answers about Sydney’s abandonment of him. But the mysteries of the past finally come to light as Sydney’s health deteriorates. Throughout the course of the novel, Trinidadian author Mootoo eloquently explores the complexities of the parent-child relationship as well as ideas about family, love, loss, and loneliness.

The novel begins with an excerpt from Sydney’s notebook, which provides a poignant glimpse into Sid’s life in a woman’s body. This section also highlights the two women who have had the most impact on Sid’s life: India, Jonathan’s biological mother, and Zain, Sid’s vivacious best friend and unrequited love. In just a few short lines, Mootoo skillfully captures Sid’s unhappy relationship with the cold and difficult India who is casually unfaithful to her and who eventually freezes Sid out of Jonathan’s life. At the same time, there is Zain’s loving acceptance of Sid. The most painfully striking memory from Sid’s chapter, however, is the discomfort that she feels in her own body. Sid sees herself as “some undecided, half-formed thing” (p.7). Eventually, through Sid’s stories, we learn of her lonely winter walk through a Toronto snowstorm to the hospital where she would enter as Siddhani and re-emerge as Sydney.

The novel is innovative in its unhesitant exploration of gender fluidity and identity. “By examining these issues against the locations of “more tolerant” Toronto, and “less progressive” Trinidad, the novel re-evaluates preconceived notions about both societies.” Sid’s life in Canada illustrates a multi-layered experience of marginalization as “an immigrant who was also an unmarried woman, a woman of color, a woman without family around her, a woman who did not look the way women were expected to look, who did not walk and talk and act like them—a woman by whom the majority of men were discomfited” (p. 209). Regardless of their background or circumstances, readers can identify with Sid’s struggles.

The author tackles a variety of other themes with sensitivity and care. The novel illustrates that familial ties are not limited to blood relations. In an interesting subversion of gender roles and identities, Sid embodies the traditional mother figure for Jonathan, although it was India who gave birth to him. Despite Jonathan’s feelings of abandonment, he has only good memories of Sid, while India is associated with memories of emotional neglect. Although Sydney’s life has been full of loss and loneliness, his final years in Trinidad are ultimately fulfilling. He successfully builds his own little family: his loyal household staff (representing a somewhat clichéd but still a genuine depiction of Caribbean society) and a devoted Jonathan. In Trinidad, Sydney becomes somewhat of a godfather for those of alternate identities and his role as nurturer extends even after his death. Sydney’s demise brings a new romance into Jonathan’s life, and he even adopts Sydney’s created family. Similarly, several of the novel’s other characters, such as Jonathan’s love interests, Catherine and Anta, are more fragments than well-delineated characters. The Trinidadian woman Anta especially seems like a plot device. Her relationship with Jonathan is brief and uninspiring. It seems to be an afterthought to encourage Jonathan to remain in Trinidad.

The novel is mostly set in Trinidad, and the island itself becomes a main character in the narrative. The multi-ethnic island is lovingly and accurately rendered through Mootoo’s careful detailing of the natural landscape, the weather, the food, and the people. Except for Johnathan and India, the characters of this book are non-white. In particular, Trinidad’s East Indian community is prominently represented. Most of the characters, including Sydney and Zain, are Indian. The novel also highlights Trinidadian Indian culture that has been severely underrepresented in Caribbean literature. Jonathan’s participation in Sydney’s Hindu funeral is a touching tribute to his parent as well as an in-depth look at a little-recorded cultural event steeped in tradition and history.

However, the vibrant prose sometimes becomes distracting and longwinded.  Toronto’s bitter winter streets and the natural beauty of Trinidad’s landscape are so minutely and repeatedly detailed that, eventually, the elegance of the words diminishes. The overly verbose prose would have benefited from being slightly toned down.  Certain elements in the novel seem stereotypical and reinforce a particular ideal of Caribbean life. For example, Sid and Zain visit a painstakingly detailed Trinidadian beach after a drive filled with descriptions of the island’s flora. Jonathan also tends to wax poetic about the environment in ways that resemble a tourist advertisement. He takes an “impromptu” trip to the Caroni Bird Sanctuary, a popular tourist site in Trinidad, and reminisces about a crab-catching adventure filled with rum and revelry. Although Jonathan’s perspective as a non-native is understandable, and many Trinidadians do engage in these activities, the novel conveys an idealized image of Trinidadian culture.

This novel is character-driven and without an intricate plot. It meanders steadily without any great leaps or bounds. At times, the story drags and can be repetitive. The recurring narrative of Sid’s journey through the Toronto snow to the clinic for gender reassignment is retold repeatedly. At first, the repetition builds anticipation, but the reader, like Jonathan, will eventually become frustrated because nothing new is learned. Although the novel’s ending is predictable, it is still poignant and bittersweet.

Despite these few grievances, Moving Forward Sideways like a Crab is an elegant and well-written novel, populated by authentic and lovingly crafted characters. The book’s innovative take on diverse themes—ranging from the immigrant experience to familial bonds—is something readers of all backgrounds can appreciate.

Rebecca Cave has been writing random snippets about the world in ratty copybooks ever since she can remember herself. She is from Trinidad and has a BA in Literatures in English and is currently pursuing an MFA in Creative Writing (Fiction). She is now working on a collection of short stories.