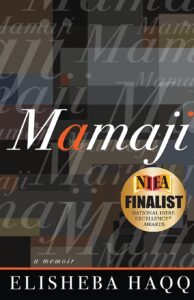 I could not put down Mamaji, Elisheba Haqq’s memoir about moving to Minnesota from Chandigarh, India in the 1960s and surviving an abusive childhood. If you are a fan of Educated, The Glass Castle, and enjoy books that are funny and wistful, you will love Mamaji.

The author, Elisheba Haqq, immigrated from India to Minnesota in the 1960s as a preschooler. She writes about life in a family of eight children with her abusive stepmother and at worst, abusive, and at best, neglectful, preacher father. Throughout the book, she harkens back to Mamaji, her biological mother who died suddenly when she was three years old.

I love memoirs about chaotic childhoods.  I am deeply fascinated by the world children build for themselves to survive cruelties beyond their control. How are some children able to get to adulthood and lead functional lives, while others experience the trauma so deeply that they are never able to heal?  In Mamaji we observe the eight Haqq children grow up in small, snowy Minnesota towns as outsiders both in their communities and in their own home.

Haqq shares many strategies that she and her siblings coined to insulate themselves from their cruel father and stepmother. In reading her account, I wanted to hug the Haqq children while also laughing out loud with them. For example, the children were not able to properly grieve their biological mother and cry. So, the children play a game called “Mamaji is dead.” They said the phrase and looked at each other, trying to keep a straight face. Eventually the children played the games so many times, they burst into laughter at the phrase. In this way, the Haqq children formed their own darkly funny emotional shelter.

Despite the difficulties Haqq faced, this is only one of many laugh-out-loud moments.  One favorite of mine was when the children convinced their prissy aunt, in her neatly wound sari, to sit in the back of a children’s toy car. The children tied the car to an older sibling’s car with a rope. What happened next was a hilarious incident that Haqq tells masterfully.

The memoir contains deeply sad elements as well. As in Educated and The Glass Castle, Haqq’s father and stepmother keep her, and the other children isolated from the outside world. The children are not allowed to socialize outside the home and their every choice is dictated by the adults. They presented as a happy family to outsiders but inside the house, the children performed grueling manual labor and consumed only meager meals. In this way, Mamaji illustrates the dynamics of abuse within a family, and how victims, particularly within immigrant families, can be isolated.

Aside from these emotional and funny moments, Mamaji shines in elucidating a little-known group, Indian immigrants to the United States in the 1960s. There were few Indian immigrants in the US at the time, and not much has been written about them. I enjoyed reading as Haqq explained the many misconceptions of the Americans around her about India and Indians. To add another layer of nuance, Haqq’s family were Indian Christians. Her father was a preacher and reading about the family’s involvement in Minnesota Christian churches was fascinating.

For all it does well, the first chapter of Mamaji feels disjointed. If you feel this way too, skip the first chapter or two and dig right in, to when the family moves from balmy Chandigarh, India, to Minnesota on a frigid Thanksgiving Day. From that point on, I could NOT put this book down.  Highly recommend this powerful book! 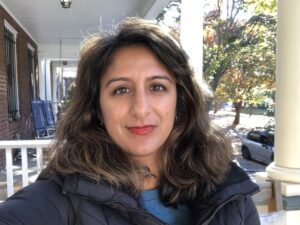 Jasmine Vyas is an aspiring children’s book author, book reviewer, bookish podcast guest, attorney, and privacy professional. She loves to read and talk books. You can hear her on the podcasts Your Favorite Book and My Favorite Book. She is currently seeking a publisher for her first children’s book. Outside of reading, she loves spending time with her husband and three children and being outdoors.