Kitchens Through Which I Have Traveled 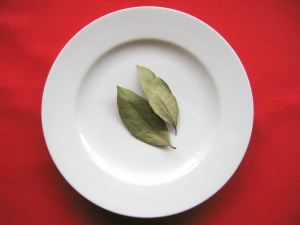 The beige one in Pasadena where my

the oak one on Friar where I spoke Urdu

and learned my first Bollywood songs,

the dank one in Gulberg where Chaudry Saab

blamed us kiddos for burning the biryani,

the haunted one in a crumbling haveli,

where I mistook my Dadi for a ghost,

the cube one in Taif where I fried peas

the humid one in Tampa where we baked

a birthday cake for my toy donkey,

the white one in Rancho Cucamonga where

I prank-called pizza joints with friends,

the pink one in Encino where my father’s pleas

the bright one on Miranda where my mother

the dormitory one in Tucson where I boiled

packets of noodle soup between classes,

the brown one in my first college rental

where I crammed quesadillas & basic Russian,

the artsy one with blue tile where a shadow

and too many fiddlings to forget:    the time

I rolled mounds of dough with a friend who

traveled on Fullbright to Tunisia where he

into a seance, learned recipes for the curries

I stirred blocks from the Pacific, painted a

cupcakes the day before my kitchen buzzed

into a swarm of bees, wrote poems about

of saying little & the risks of saying too much.

Stewings where I drank bottles of cheap red

moving into a home where the refrigerator

seems familiar and where the kitchen greets

a stove.    All it wants in return is to be touched by

the hands of someone who can stir a pot of

vegetables, who can trust the spices to do

their work, since they have traveled so far. 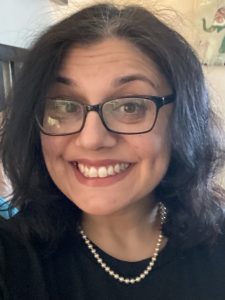 Mehnaz Sahibzada was born in Pakistan and raised in Los Angeles. She is a 2009 PEN America Emerging Voices Fellow in Poetry. Her work has appeared in numerous publications, such as Liminality, Moira, The Literary Hatchet, Desilit, Ellery Queen Mystery Magazine, Pedestal Magazine and Strange Horizons. Her first full-length collection, My Gothic Romance, was published in April 2019 by Finishing Line Press. A high school English teacher, she lives in southern California. To learn more about Mehnaz, visit her at www.poetmehnaz.com