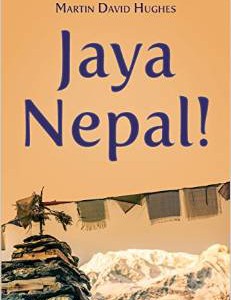 Jaya Nepal opens with the protagonist, Benjamin Creed, a young wide-eyed, jet-lagged Peace Corps volunteer, arriving in Nepal’s capital, Kathmandu. The first chapter portrays the culture shock experienced by an American in a typical Asian metropolis, replete with bustling crowds, stray animals, beggars, and dense traffic. This ‘olfactory barrage’ includes: “Thick pollution, human waste, and burning garbage mingled with jasmine-scented incense, sandalwood perfume, cardamom, coriander, and cumin” (7). Amid the crush of travelers, taxis, and rickshaws, Creed manages to find his official greeter, Madhu Prasad Patel, a lively and gregarious man who instantly becomes his tour guide and, later, a close and loyal friend. Creed soon meets his fellow Peace Corp volunteers and training officers. The eclectic group, officially referred to as N-199, consists of several colorful personalities: abrasive and brash Bronte; serious and professorial Manfred; warm and motherly Beth; quiet and forlorn Laura. Their meeting place is a restaurant quaintly named “The Rum Doodle”, which becomes their regular weekly hangout, where they will share rounds of beer and their respective anecdotes, successes, and frustrations during the course of their tenure in Nepal.

Creed had joined the newly reinstated Corps in Nepal to eradicate the pain of losing the love of his life, Adriana da Rosa, an Indian-American student he met while studying at Berkeley. Although they had never been intimate, Creed professed his love for her and she was determined to marry the man chosen for her by her parents. However, the arranged match did not work out, raising Creed’s hopes that Adriana would return to him. Instead of falling into his willing arms, however, she left the United States to work in Dharavi, one of the most notorious slums in Mumbai, India. Joining the Peace Corps appears to be Creed’s solution to heartbreak while simultaneously attaining personal growth and rounding out his education, and perhaps even finding a new love. Keen on making the most of his stay in Nepal, Creed decides to explore Kathmandu and its environs on his own. In the process, he meets some interesting characters like the eccentric, ganja-smoking British activist and tramp, Peter Dalrymple (Nepali Pete).

After an extensive three-month-long training in language and cultural instruction, Creed and the other volunteers are dispatched to their individual posts around the city. As a trained nurse, Creed is officially assigned to work at a hospital outside Kathmandu named Pepsicola Townplanning. (It is home to a run-down Pepsi plant.) He meets the hospital’s director and his boss, Dr. Singh, a talented, vibrant, and dedicated medical professional who slowly becomes Creed’s mentor and dear friend, even a father figure as their relationship evolves. Creed’s local host family consists of a young single mother, Shruti Bhupani, and her little daughter, Annu. Boldly defying her conservative neighbors’ outrage over the impropriety of a young man living under her roof, Shruti makes Creed feel welcome in her humble cottage. She even manages to make him appreciate the typical Nepali diet of dal bhaat and tarakaari: rice, legumes, and vegetables.

As Creed becomes more comfortable with his surroundings and settles into his work routine, he also engages in a few adventures in his free time, including a tough and memorable trek into the Himalayan Mountains and brief trips to the less-traveled corners of Kathmandu. Along the way Creed meets other individuals who touch his life. One of them is Raju Shreshtha, the enigmatic owner of The Slice of Life Bakery, a shady, off-the-wall dessert bar and hookah lounge. In Creed’s words, “In the cake shop’s dimly-lit confines mingled a crossroads of career criminals, thugs, pushers, and mercenaries, the occasional pair of young Nepali lovers, and a steady stream of adventurous backpackers.”

Despite his attempts to forget Adriana, Creed remains obsessed with her. He even makes an impulsive trip to India to find her. Driving a beat-up vehicle through the crowded cities and towns of India, including Mumbai and Goa, proves to be quite an adventure in itself. Many of the protagonist’s weird experiences on Indian streets and slums are reminiscent of Shantaram by Gregory David Roberts. At times, Creed’s escapades sound a bit like fantasy, but allowing for artistic license, they add to the drama of the unfolding story.

Overall, besides telling a tale of complicated relationships, Jaya Nepal is a touching tribute to the gentle and welcoming spirit of the Nepalese people, their enduring strength in the face of poverty and hardship, and above all their generosity to strangers. Through Creed’s young and naive eyes we see a side of Nepal that tourists seldom get to experience. We also learn about the workings of the Peace Corps, the energy, the hunger for exploration, and the dedication of its young volunteers. The author has clearly traveled extensively in Nepal, and seems familiar with its geography, demographics, and to a large degree its distinctive culture. The descriptions of urban Kathmandu as well as the Himalayan vistas are vivid, inspiring, and well worth reading. Hughes is a gifted storyteller, but the story could have used more realistic dialogue. Some of the characters sound somewhat bookish for people engaged in casual repartee over a beer in a cozy cafe.

Jaya Nepal is branded as fiction but at times reads almost like a memoir-cum-travelogue. Also, while the darker side of Nepal and India are depicted frequently and in great detail, the protagonist himself is rarely affected by it. It is a stretch to imagine how an inexperienced young American miraculously manages to avoid getting robbed, conned, or physically harmed by the insidious criminal elements lurking in Nepal and India’s urban jungles. However, despite its minor flaws this book is a very enjoyable and informative read, especially since it delves deeply into native Nepali culture and the many issues facing contemporary Nepal.

Shobhan Bantwal is the author of six novels and co-author of two anthologies. Her articles have appeared in The Writer, Romantic Times, India Abroad, Little India, New Woman, and India Currents. Her short stories have won honours/awards in contests sponsored by Writer’s Digest, New York Stories, and New Woman magazines. Two of her novels have won The Golden Leaf and National Indie Excellence Awards. Visit her at http:/www.shobhanbantwal.com or on Facebook.