The Fragrance of Freedom by Padma Prasad

In the midst of the dust and darkness and distant sound of gunfire, Arul sat like a God, his limbs extended effortlessly, his face open and neutral; he looked breezy as if he was fragrant with freedom.

The Second Honeymoon by Praveena Shivram

They were meant to leave next week, very early, Subbu had said, and Lalitha was already dreading it. She couldn’t imagine surviving even a minute with Subbu without the blanket of everyday routine wrapped around her tired body. And to think she would be alone with him for one whole week!

The Housewife by Rituparna Roy

For the few times that Ruplekha and Rion dated, during the three months of their official engagement, the time allotted to them by their parents for “getting to know each other”, she found him to be handsome, well-mannered, and with a good sense of humour – all of the attributes she liked.

the caked muddy houses
the ponds
and the fish.
You cannot be from there
and still be here.

the tree cast an afternoon shadow
that made my mother think
of the black eyes of crows, the running
water in the dark.

A Touch of Darkness by Bassam Sidiki

There is a beauty in piercing the darkness of judgment
by making love, finding freedom
in luminous iron chests – fragrant dahlias.

An Interview with Hoshang Merchant by Gourab Ghosh

I wanted to write the secrets of an Indian gay world, the knowledge that I picked up in the gay terrain of 1960s Bombay. I wanted to shape the literary world of the gay writings of India through this anthology.

The Efficacy of Modern Democracies at and beyond Home by Rahul K. Gairola

With the normalization of Trumpism’s exclusionary rhetoric, neoliberal capital exacts an alarming sway on democratic pluralism in the hardline Hindutva societies of Modi’s India.

Qayenaat is a refreshingly different protagonist. She is not the typical Indian woman. She is fifty-three years old, single, keeps in touch with her ex-boyfriend, is not afraid to take on lovers and doesn’t have a religion. She does not have a steady job but has an intense love for the arts.

(translated from the Kannada by Srinath Perur). Reviewed by Anibal Goth

…The change in the family’s circumstances as equal parts disaster and miracle, unpredictable in its causes as well as its effects.

In Other Words by Jhumpa Lahiri

Translated from the Italian by Ann Goldstein. Reviewed by Chinmaya Lal Thakur

Jhumpa Lahiri’s In Other Words deserves to be read and re-read, for it is an incredibly sincere account of the journey of a writer who, while at the peak of her creative abilities of expression in a particular language, courageously chose and attempted to learn to read and write in another one. 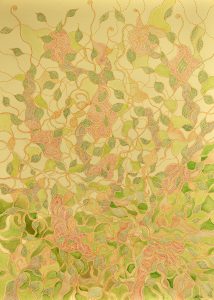 I just like to ‘dot’ my thoughts down rather than jot them down. The grappling in my mind for the right word, in the language I want to express myself in kills the spontaneity and easy flow of the thoughts and feelings. The visual languages I use help me record thoughts in the form of wandering dots, dashes or lines to create patterns.