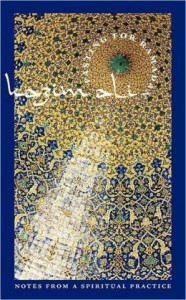 In Fasting for Ramadan, Kazim Ali journeys into the various physical, spiritual, and philosophical transformations one undergoes while fasting for Ramadan. The book encompasses two separate observations of Ramadan, chronicling Ali’s experiences in 2009 when he kept an online blog of his spiritual and fasting process, and also in 2007 when Ali first attempted to capture the experience of Ramadan in diary form.

In this collection, Ali’s essays range from detailing his struggles with staying active and inactive during the Ramadan period, to his relationship to the exterior world and his own body, to beginning to understand the outline of his own spiritual life. At times the essays, which are marked by lyricism, veer toward sentimentality, too much listing, or a preoccupation with the mundane. However, it is this focus on the minor details of one’s daily existence and the forced attention Ramadan brings to the practices of awakening, exercising, eating, working, and meditating that allow some of Ali’s pieces to become quiet and illuminating gems—-that is, prisms into the machinations and uncharted areas of one’s own psyche and spirituality.

What makes this collection of essays especially exciting is the way in which Ali confronts his own body and his relationship to religion and spirituality. Below the surface of the daily accounts there is a startling and uneasy confrontation with one’s own mortality, which Ali at first acknowledges quietly and then begins to own during the course of his abstinence and fasting. In the 2007 diary, Ali explores the fragility of the body through the surgery and slow recovery of his partner, Marco. In the meditative silence of the 2009 Ramadan and in the various kinds of physical and psychic hungers the observation forces the individual to confront, Ali begins to look more closely at his relationship to his own body. He writes, “Our tendency to live in terms of ‘one time,’ distant from our present, always thinking about something else, either looking backward or looking forward, may have some relationship to the animal fear of being alarmingly present in the corporeal body. Because to be really present in the body, to breathe it, to use it, to stretch it and feel it, not just once, but over the course of weeks or months or years, to feel it age, to know its character, is to know: that the body dies.”

This “animal fear of being alarmingly present in the corporeal body” is the anxiety that lurks beneath Ali’s essays as he journeys through the worlds of hunger, abstinence, and reflection. As he begins to interrogate the needs of the body and its limitations, Ali ponders how aging, the body in decay, and the inevitability of death shapes understanding of his actions, sense of self, and present moment. His ruminations demonstrate how the physical body can be a conduit connecting the physicality of daily life to a more meditative, spiritual realm.

Moreover, in trying to grasp and define the contours of his own spirituality, Ali comes to some of the most startling and refreshing conclusions about his own religion and selfhood. At one point in the 2007 Ramadan essays, Ali ponders whether his religious practices, in which he observes the abstinence period of Ramadan but abstains from a daily prayer ritual, make him “Muslim enough.” This anxiety of seeming less culturally or religiously Muslim creates an undercurrent of tension in Ali’s 2007 journals.

Even during the 2009 Ramadan fast, when Ali invites his students over to join him in breaking the fast during an evening iftar meal at sunset, a few of his students ask for a room in which they can pray, and Ali leads them to the small room where he practices yoga and meditates. At the makeshift altar, there are statues of Buddha and Ganesha, which he explains are used during his meditations but which he removes for the benefit of his students. Later the question of “why I felt the responsibility to explain myself” haunts Ali’s mind. As a practicing student and teacher of yoga and as a young man who comes from a Muslim-Indian family, Ali weaves together a variety of religious and cultural narratives, from the varying practices of yoga to the symbolism of Buddha and Ganesha to the story of Ismail and Hajira to his own vegetarianism and complex, technology-fueled modern American lifestyle. Although Ali may worry if he is authentically Muslim, South Asian, American, spiritual, or artistic enough, it is his embrace of the diverse and varying set of customs and cultural values comprising his own reality that make Ali authentically human and make his journeys into Ramadan, and into himself, such a pleasure to read.

Rita Banerjee teaches modern South Asian literatures, Bengali language, and art house film in Munich. She received her PhD in comparative literature from Harvard this year. Her creative work has been featured in VIDA: Women in Literary Arts, Catamaran, the new renaissance, and the Fiction Project. http://ritabanerjee.com