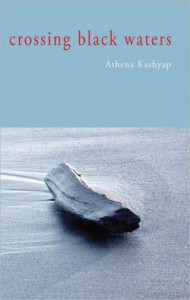 In her debut collection of poetry, author Athena Kashyap references “black waters” to evoke two separate “crossings”: the first, when the author moved to the United States from the country/city of her formative years, and the second, when her great-grandfather uprooted his family from Lahore and made the crossing to India.

Embedded in the poems, which move back and forth between the Indian subcontinent and America, is a longing for “home” that is realized in the mind. However, when the poet finally returns to her abandoned family home in Pakistan, she finds that what was left behind is just “half of everything.” Even the fulfillment of her longing is faltering, uncertain: “Of all the seeds planted / by great-grandfather in Lahore, / only trees remain— / clinging on.”

The backdrop of San Francisco, on the other hand, represents a more abstract existence, an occupation rather than a belonging, a perpetual halfway house. Kashyap declares her position succinctly: “I am knot.” There is a sense of slow loss in her America-centered poems, in a country where, according to the poet, she is so free that she floats away: “I am diluted, having left one world to live and travel in / others. My skin grows permeable, breathable.” It is at this plane of osmosis, of skin as filter, that the experience of America occurs. Her poems situated beyond the black waters absorb the local, but the specifics of a home left behind intrude: the taste of tandoori, of sweet Gujarati food, snippets of Hindi film songs, and the memories of Mumbai trains all collide with the present.

The poem “Zero Generation” addresses immigrant loneliness as a collective experience, in that it speaks to those who “long to belong, but also long to return / back to where we once belonged.” The desire for making a world in a foreign land is inherent, but described here is an immigrant experience that just does not settle, and Kashyap’s poems simmer at this cusp. She references a popular line from a film song, “Aye dil, hai mushkil jeena yahaan,” which translates to, “My poor heart, how difficult it is to live here!” While the “here” in the context of the song refers to Bombay, the author borrows the expression to refer to life in America. This move by the author achieves the effect of making the hard reality of urban living there—or here—universal.

Kashyap writes of sundering, separations, crossings, reunions, and uncertain reconciliations. The break with an imagined home is never forever; return is always a possibility yet remains unsatisfying whenever it occurs. Crossing Black Waters is a many-layered book about the simultaneity of multiple existence that is becoming more frequent in our modern world, where all our online networks are no substitute for being “there,” and being there is no longer an end in itself.

Mustansir Dalvi teaches architecture in Mumbai, India. His translation of Muhammad Iqbal’s poems from the Urdu, Taking Issue and Allah’s Answer (Penguin, 2012) was runner-up for the 2012 Best Translation Prize at the Muse India National Literary Awards. Brouhahas of Cocks (Poetrywala, 2013) is his first book of poems in English. http://asanyfuleknow.blogspot.com.