In Other Words by Jhumpa Lahiri. Translated from the Italian by Ann Goldstein. 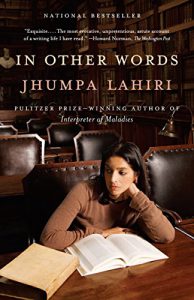 Jhumpa Lahiri won the Pulitzer Prize for Fiction in 2000 for her short story collection The Interpreter of Maladies (1999). Her other noted writings include the novels The Namesake (2003) and The Lowland (2013) whose publication was punctuated by the appearance of the acclaimed story collection Unaccustomed Earth (2008). A certain similarity of theme and structure characterises these works. Lahiri, an American writer of Bengali-Indian descent, writes mostly about Indian immigrants settled in the West, typically in the US, who live through a poignant sense of un-belonging. Having been uprooted from their homes in India/countries of the Indian subcontinent, they live in surroundings that are linguistically, emotionally, and culturally unfamiliar. They do so because the West provides them, despite the great sense of physical and psychic dislocation, with opportunities of livelihood, money, and materially comfortable living. The newly married Ashima and Ashoke, who migrate to Massachusetts from Calcutta (now Kolkata) in her novel The Namesake, serve as a case in point.

Jhumpa Lahiri’s latest book (though she did write The Clothing of Books, a pocket-sized, personal account of book-covers, in November 2016) In Other Words (In altre parole in the Italian original, 2015) marks a radical departure from her earlier work. She has written this book in Italian and it is an autobiographical account of her remarkable journey from being a renowned US based writer in English to being a writer in Italian who is now domiciled in Rome. In Other Words, in this sense, represents the culmination of a fresh way of negotiating the relationship between writing and self-expression that becomes available to her once she begins to write in Italian.

A series of metaphors come to help Lahiri’s exploration of the relationship between language and self-expression. They are signifiers of her feelings towards her own self which now gets expressed in Italian instead of the more familiar and comfortable English.  Some of these metaphors serve as the titles of chapters such as ‘The Crossing’, ‘The Dictionary’, ‘Love at First Sight’, and ‘Venice’, among others. Take, for instance, the nineteenth chapter of In Other Words titled ‘The Triangle’. Here, Lahiri argues that her linguistic expression and capability seems to have been constituted by a triad of languages i.e. Bengali (that her parents speak), English (that she grew up with), and Italian (that she has now adopted). In this sense, Bengali for her remains a reminder of the multiple ways in which her parents adjusted to their lives in the US while English represents her own struggle while growing up in that foreign land. Italian, on the other hand, presents a fresh possibility of self-expression for her, resulting from the experiences of living and travelling in Italy as well as by the fresh techniques of reading, writing and composition that become available to her in Italian contra English.

Reading in another language implies a perpetual state of growth, of possibility. I know that, since I’m an apprentice, my work will never end.

When you’re in love, you want to live forever. You want the emotion, the excitement you feel to last. Reading in Italian arouses a similar longing in me. I don’t want to die because my death would mean the end of my discovery of the language. Because every day there will be a new word to learn. Thus true love can represent eternity. (45)

Lahiri’s decision to shift from writing in English to being an author in Italian indeed provides her with new possibilities of expression but also exacts a great emotional and creative price from her. She realises that she will never be completely ‘at home’ in Italian even as she will feel stifled and suffocated were she to return to English. A poignant paradox underlies this realization for English continues to be the language that she is most comfortable working with whereas she has to struggle to read and write in Italian. In this manner, she ends up at a point that lies at the margins of both English and Italian. In Other Words, then, is a story of a failed exile, for Lahiri conclusively departs from expressing in the English language but never completely arrives at expressing herself in the Italian. The following paragraph that concludes the chapter titled ‘The Second Exile’ suitably illustrates such a feeling:

Those who don’t belong to any specific place can’t, in fact, return anywhere. The concepts of exile and return imply a point of origin, a homeland. Without a homeland and without a true mother language, I wander the world, even at my desk. In the end I realize that it wasn’t a true exile: far from it. I am exiled even from the definition of exile. (124)

It would be unfair to judge In Other Words as an exercise in failure merely because in this work the author is not at the pinnacle of her creative self-expression in Italian. Rather, the manner in which Lahiri positions herself in a space that lies somewhere between English and Italian is what makes this book both poignant and successful. The author should be congratulated for depicting the transition from writing in English to writing in Italian in an honest and sincere manner. It is indeed her sincerity that, for instance, did not allow her to translate the book from Italian to English herself. In the ‘Author’s Note’ to In Other Words, she refers to this choice that she exercised in the following words:

…had I translated this book, the temptation would have been to improve it, to make it stronger by means of my stronger language. But I wanted the translation of In altre parole to render my Italian honestly, without smoothing out its rough edges, without neutralising its oddness, without manipulating its character. I instinctively felt, when I learned that the book would be published in English, that another translator, one with more experience and with greater objectivity, was best suited to perform this operation… (XII)

Lahiri could not have found anyone better than Ann Goldstein to translate her first book in Italian. Goldstein’s rendering of Lahiri’s prose flows so smoothly that, at times, it made me forget that In Other Words was not written in English in the first place. Since I do not know Italian, I would not be able to tell whether the translator acted against the wishes of the writer and indeed “smoothed out the rough edges” of the latter’s Italian or whether Lahiri was just being modest in suggesting that her writing has rough edges and a certain oddness. What I can certainly say is that Jhumpa Lahiri’s In Other Words deserves to be read and re-read, for it is an incredibly sincere account of the journey of a writer who, while at the peak of her creative abilities of expression in a particular language, courageously chose and attempted to learn to read and write in another one.

Chinmaya Lal Thakur is an avid reader of fiction and non-fiction, especially by Indian writers. Some of his favourite authors include Shrilal Shukla, Amitav Ghosh, Geet Chaturvedi, Franz Kafka, J.M. Coetzee, Margaret Atwood, and David Malouf. He is also a Research Scholar at the Centre for English Studies, Jawaharlal Nehru University, New Delhi. His areas of academic interest include Literary Theory, Studies of the Novel, and Continental Thought. He has published a few stories, poems, and critical essays in various journals and magazines.