Green is the Colour of Memory by Huzaifa Pandit 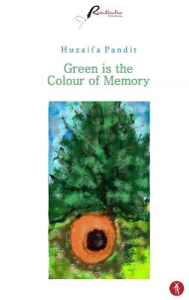 Huzaifa and I wouldn’t have met had it not been for a seminar he came to attend in Kolkata. He stayed in the city for a week and we happened to meet every other day – I was mostly a listener throughout, completely taken in by his ability to recollect (and recite from heart) couplets after couplets of poetry with such effortlessness. Huzaifa had poems up his sleeve.
I have read Green is the Colour of Memory almost three times now, sometimes with my friend, but mostly, alone. Huzaifa’s poems speak the language of silence and it’s often when severely exhausted after an inexplicably lonely day that I have picked it up again and again to read through the pages. And, on such days it has brought me a strange comfort to read the last couplet of his last poem, “Hysteria”:

“The parchment of my heart
is empty, quite empty.”

We are what our homes make us – broken, maimed, whole in pain, half in happiness. Huzaifa and I come from very different homes and homelands. We have grown up differently. We have learnt to compose poetry differently. We don’t have the same stories to look back to. So, where do we find a common ground? For, surely, we do. It’s probably because we have been whole in pain and half in happiness for a while now. But, then I can’t tell. We often mistake the idea of a common ground for something that arises out of the similar, the commonly familiar – what if it comes from difference? What if we find a common ground only when we learn to accept difference? Thus, it is with my comradeship with Huzaifa and his poetry. Our daily lives are often so incomparable that we come halfway despite all barriers to share stories of resistance and solidarity.

To say Huzaifa’s poetry is political and stop at that would be an injustice to his language of politics – a language that is rooted in the historical past and present of Kashmir and being a Kashmiri, but also rooted in other identities. Huzaifa’s time in Pune as a student reverberates in his poetry. One identity comfortably slips into another as he writes down his words in English – a language, for most of us, not our own yet. In his poem, “Train to Bombay”, Huzaifa writes:

It’s interesting how he chooses to write that it is his “accent” that is “imported”. His language isn’t. He goes on:

“I forgot all the memories
of high school geography
so forfeited my right
to feign nationality.”

For all the rhetoric of Kashmir being an “integral part of India”, the way a Kashmiri speaks sounds “foreign” to those in Bombay. This idea of foreign-ness isn’t limited to speech alone as Huzaifa suggests in the next line; his “fair skin” and “brown hair” are also seen as markers of difference. But, he asks the perfect question:

“Would they slap betrayal if I confessed
my fair skin and brown hair were
painted by the icicles of Kashmir
rather than the European sun?”

The first time I read this poem, I was reminded of one particularly sultry afternoon when I had accompanied Huzaifa to a fairly unpopular bookstore in Kolkata. He had bought close to ten books and while paying, the accountant – who had been eyeing him for a long time with a bemused smile on his face – had asked him, “Where are you from?” And, Huzaifa, in his poetry-chanting tone, had replied, “How does it matter where I come from?”

The image of the city is something I find very intriguing in Huzaifa’s poetry. The poet speaks with the city and it is brought to life – a life otherwise unnoticed, inconspicuous. In his poem, “Reading Faiz on Deewali”, he writes:

“Beneath this cloak of fog
lies hidden the lost city of dead lights.”

A city that lies hidden, a city that is lost, a city of dead lights is brought to life by the poet for a series of questions that no one has an answer to. Diwali is a festival of lights, but the only light that this poem mentions is either dead or “exiled”. The series of questions begin with remembering prison-houses:

“City of dead lights, who will draw the map to the prison
of exiled lights?”

For a reader outside Kashmir, sitting comfortably in his/her bedroom, this association may seem out of place. But, this is the only association accessible to the poet for whom Diwali is but a “fog-stained sky” where clouds loom “like an overheard babble/of heartbroken sighs, dry blood and destitute tears”. The commonly understood idea of a festival is overturned in this poem, for, Huzaifa’s idea of it comes from a “policed world”.

In another poem, the city is said to have had a language once. But, now, “your beloved is barricaded/in meshed screens of silence/it has been a century”. At a time when the city would also speak, the beloved “was the muezzin”. A muezzin is one who gives out the call for azaan. His voice prepares the city for prayer, but on a “curfewed Friday”, one must pray alone – even the sound of a sigh shouldn’t reach the streets.

One could go on and on about Green is the Colour of Memory for it evokes jarring images of heartbreaks, curfews, despair. Most importantly, it tries to reach out with its own language of silence, resistance, and love and one need only walk halfway to take its hand in one’s own. I’ll end with one of Huzaifa’s poems, a favourite, “On Visiting My Old Classroom”:

“I grew up aimlessly
and too slow.
I might be ageing
for light fades quickly.
Yet I have harboured
a notion of an art.
As I grew up
I numbered my years.
I still keep those numbers
and stare at them.
They lie beside me
for old ghosts
do pay a visit, sometimes
to their graves.”

Sahana Mukherjee is currently pursuing research as an M.Phil scholar at Jadavpur University. She is the 2017 Charles Wallace Fellow at the University of Edinburgh in Creative Writing. Her poems have previously been published in The Sunflower Collective, The Four Quarters Magazine, Galway Review, Café Dissensus, Vayavya, Voice and Verse Poetry Magazine and more. Her first book of poems, August Ache is expected to be out shortly.