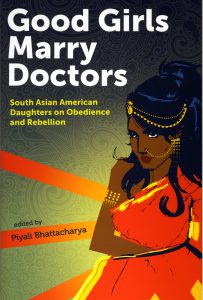 This anthology of essays edited by Piyali Bhattacharya begs the question: If good girls marry doctors, what, then, do bad girls do?

Twenty-six South Asian American women respond by reflecting on their own lives, putting their personal stamp on their brand of rebellion. The book provides a window into the complex world of the South Asian female experience which is as diverse and multifaceted as the South Asian cultures themselves. Novelist Naomi Munaweera in“‘The Only Dates Are the Ones You Eat and Other Laws of an Immigrant Girlhood” sums up perfectly the challenge of blending her parents’ cultural ways with the American experience:

“My father obeyed his parents’ every wish until he was in university. If he hadn’t, there was an entire system to cut him down to size, aunties, uncles, even the village monk, everyone would get involved in guiding youth. Everyone was extended family; everyone had a say. So I can only imagine what a difficult transition it was for my parents to land in America and realize that here their daughters might openly defy them.” Rebelling as a Southeast Asian daughter often meant – and means – challenging not just your immediate family, but everyone you know. Some families and friends came around, while many others couldn’t recognize that the image of the “perfect” daughter is really just a mirage.(p. 127).

No two families or experiences are the same in the accounts of these wonderful and diverse women. In “My Mother, The Rebel” Jabeen Akhtar writes of growing up with a mother who was on the front line of politics, taking her daughter to rallies and standing up to the KKK. When a relative shows up in a fur coat, admitting that it was an old heirloom, it is her daughter who is asking her mother to “not make an issue of it.” (p. 17). Roksana Badruddoja “The Fantasy of Normative Motherhood”, Leila Khan “Affording the Perfect Family”, and Swati Khurana “Becoming a Reluctant Breadwinner” each write about the specific challenges they faced and how their rebellion has enhanced and torn down their ideas of being a “good” mother.

There are also a number of essays about queer women, and why their particular brand of rebellion had to be subversive. Hema Sarang-Sieminski “Amma” married a gay man with the hope that each could live their way and still honor their cultural traditions. For SJ Sindu “Draupadi Walks Alone at Night” truth is a weapon. Every time she meets a family-approved suitor, she tells him outright about her bisexuality, polyamory, and of her desire to be childless, adding that her last suitor wanted her to marry him and keep this part of herself hidden.

It is important especially for women who are not of color to read this collection. For feminism to truly transcend its current state and become all-inclusive, we need to understand that, for many women, rebellion has serious, lifelong consequences. Rebellion requires extra strength, extra moxie, and a lot of outside support. Many of these women were blessed with supportive families, many had parents who couldn’t understand why their daughters were so ungrateful for the sacrifices made for them.

This collection helped me examine my own white privilege. As a heterosexual, cis-gender white female, I can relate to parts of it. I did not grow up with immigrant parents who sacrificed everything to give me a better life. I have not had to walk the precarious edge of balancing my individual identity with my cultural one. I definitely didn’t have to deal with arranged courtships and marriage, or a sexuality that differed from that of the majority population. These brave women write about their families and share their own stories, fully aware of the cultural and community repercussions. The insight provided here can only be grasped through story-telling and through hearing the stories of others. My perceptions were challenged; many of which I didn’t even know I possessed.

Jessica M. Kormos works as a mild-mannered Quality Assurance Analyst by day, and a speculative fiction writer, copy writer, and data analyst by night. She is a graduate of Viable Paradise XVIII, and her work will appear in Daily Science Fiction in the summer of 2017. She is hard at work on her first horror novel in sunny San Diego, fueled by iced coffee and California burritos.