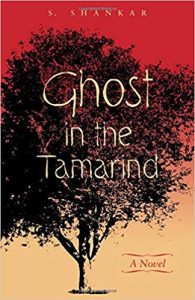 A fictitious tale steeped in forbidden love, societal struggles and a country’s struggle to independence, Ghost in the Tamarind is a gripping read. Although it takes place in the 1970s, there are parallels that one can still draw to the India of today. The caste system, a powerful and ingrained structure of society, with the crushing effect it has on individuals who dare to oppose it, has woefully stood the test of time. The narrative is memorable with every character forming budding attachments with the reader. It is a novel that ignites the soul with sensory language and captivating moments.

Ramu, the main character of the story, is a Brahmin boy who hails from Southern India. This young boy’s life takes a sharp turn when he discovers a man’s body underneath (you guessed it) a tamarind tree with his throat viciously slashed. The corpse belongs to an estate worker, Murugappa, who worked for the family estate that Ramu’s grandmother presided over. Understandably, the brutal nature of the death leaves Ramu deeply affected and scarred. But, at the same time it is the death of an Adi Dravidar, which means the murder is forgotten and even buried within the hegemonic system of caste.

In an effort to unburden himself, Ramu reaches out to Ponni, Murugappa’s daughter. And in the shadows of unspoken castes, a keen friendship between the pair is kindled and grows. As their love blossoms, the turmoil of caste in India begins to loom large. The staunch ideologies surrounding the caste system soon catch up with the star-crossed lovers and follows them to all the corners they seek in order to hide from the oppressive and hateful society. Since Ponni is from a lower caste than Ramu, she is referred to as an untouchable. Throughout their love and marriage, neither of their families support them. Regardless, the couple refuse to let the oppressive state of India dictate their life.

The story progresses to speak of Ponni’s deep involvement with education and her staunch resilience in the face of adversity. In an effort to eradicate the hateful ideologies embedded in their society, the pair of them turn to spreading awareness far and wide. The reader cannot fail to notice the tremendous amount of sacrifices that the duo must make. When Ramu and Ponni build a school in Thirunelveli, the owner of the land soon realizes that leasing the land for building a school results in a loss of workers. Trouble rears its head every step of the way, making the novel increasingly entrancing with every progressing chapter.

In their struggle to choose love over societal control, they realize that society’s countless members lean towards the latter. In a world where oppression is common, many forget what they stand for and cower under the pressure of stronger forces and powers. Countless individuals have accepted the lives they were assigned, and the fates bestowed upon them. What makes Shankar’s novel fascinating is the extraordinariness of ordinary people, driven to great lengths developing the courage to stick to their position, unapologetically. The couple that risk all they have in order to bring about a change in the society that they live in – now that is a story I would read to a crowd and wipe away welling tears in unison.

Well-woven and crafted with words that ring in one’s ears and rattle in the ribcage, Ghost in the Tamarind is a story that speaks of jarring realities that surround us to this day. The contrast of time does well to highlight the state of affairs back in the day, but, it also works to bring to light the fact that not much has changed in India. Controversial, hauntingly beautiful and gripping, it is a novel one must not hesitate to dive into headfirst.

Ghada Ibrahim is currently pursuing her undergraduate degree in Psychology. Aside from being an avid reader immersing herself in the literary world, she also runs her own food blog (FoodieLassie.com). She has been blogging and writing since the age of 15 and has worked for multiple blogs and digital newspapers including Freaked, TheAppMedia and LawyerHerald. Ghada aspires to become a published author one day and share her love for all things literary with the rest of the world.