(translated from the Kannada by Srinath Perur). 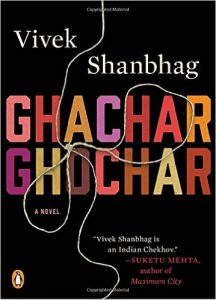 Ghachar Ghochar tells the tale of a family’s rise from the brink of genteel poverty into the ranks of the comfortably rich. The word “rise” might be a little misleading as it usually suggests a gradual and purposive movement towards an established goal. It would be more accurate to describe the change in the family’s circumstances as equal parts disaster and miracle, unpredictable in its causes as well as its effects. The narrator’s father returns one day from his job as tea salesman with the news that the firm which employs him has compelled him to take premature retirement. As the family prepares to tighten its collective belt, Amma, the narrator’s mother, has already begun to implement cost-cutting measures: cooking gas is the first “luxury” to go. Chikkappa, the narrator’s uncle, steps in to save the day. With the start-up capital provided by his brother’s savings, Chikkappa creates Sona Masala, the business idea which catapults the family into a strange new house, and an even less familiar prosperity.

This sudden and unexpected turn in their fortunes is not altogether a good thing. Used only to the modest monthly salary which Appa drew from work, the family finds its earlier rhythms and certainties quickly eroding on exposure to the luxurious lifestyle permitted by the success of the rapidly growing business. Changes to the emotional fabric of their lives are paralleled closely by alterations in more material circumstances. In moving from the old house to the new, for instance, they exchange also the easy, familiar intimacy of living in close quarters for the “cells of individual rooms” (58) where they can retreat after a skirmish. Wounds naturally fester in this new environment, and the possibility of a lasting peace seems to be nothing more than a passing mirage.

The title “Ghachar Ghochar” (the meaning of the phrase is revealed later in the text), perfectly encapsulates the narrator’s situation: a vividly realized scene at the close of the novel illustrates the inextricable entanglements from which it derives its title. On a lazy Sunday evening, the family trickles into the kitchen for tea. Relaxed conversation and gossip from their former neighbourhood makes the atmosphere glow with warmth and familiarity. Old nicknames, remembered and deployed, serve to further deepen the emotional charge of the setting. For a moment it seems as if the family has managed to recover an intimacy and carefree happiness lost – or abandoned – somewhere along their road to prosperity. The illusion is shattered by Appa’s shock at the casual discussion of how easy it is in today’s world to get away with murder. His younger brother, both bolder and less scrupulous than Appa, retorts that he is “living in another age.”

With the rise in their fortunes, the family organizes its needs, desires and time around Chikkappa, so that the goose that lays the golden egg lives in comfort. In the aftermath of the described incident, the claustrophobia pervading the novel only intensifies. Here is a family which can only stage again and again the same disagreements and fights, without any hope of the underlying issues ever even seeing the light of day. The persistent fear of a reversal in fortune – as sudden as the one which brought them financial security – haunts them and makes them selectively blind to each other’s faults. Appa could lose his mind, as the narrator points out, and commit his portion of the Sona Masala wealth to philanthropic enterprises, thereby cutting his wife and children out of their expected inheritance. Or worse, Chikkappa could get romantically entangled and be influenced by his lover/wife to abandon the rest of the family to its own devices. The spectre of this possibility is no doubt what provokes Amma and Malati (the narrator’s sister) to be so harsh when a woman – evidently on very intimate terms with Chikkappa – turns up at the house with his favourite dish.

For all the narrator’s obsessive and often critical contemplation of his difficult domestic life, there is little that in the final instance to distinguish him from the family which he so subtly ironizes. There is no attempt on his part to hide or disguise his own complicity in the morally dubious situations in which he is placed. This unwillingness to moralize and condemn, however, is precisely what drives the novel and gives it the complexity which winding narratives twice its length often fail to achieve. The narrator is never given a name within the length of the novel. His anonymity is suggestive: it makes of the narrator an everyman – a typical member of the urban bourgeoisie, with all the attendant problems which belong to any person of his class and position. What particularizes him, however, is the fact that his domestic problems (and isn’t his life exhausted by its sheer domesticity?) enable him to delve into his own consciousness. Even as the reader realizes that the novel is more about the narrator’s search for self-definition rather than the circumstances he uses to fuel his ruminations (imagine, if possible, a Hamlet sans tragic gravitas), his namelessness installs him as a paradoxically impersonal authority within the text. This seeming authority, however, eventually dissolves into an insubstantial vapor, much like the family’s attempts to find peace within and among themselves. Anita (the narrator’s wife) is the only person who can safely criticize the family: everyone else is too invested in (and used to) not rocking the boat.

The novel ends much as it began, in an atmosphere of pervasive helplessness: with the narrator brooding in a dimly-lit corner of Coffee House, eagerly hoping to receive distilled wisdom from an oracular waiter, and feeling powerless to do anything about his tangled life.

There is little to dislike about the book: Shanbhag has composed a narrative which is sharp, precise, and taut with tension. That this is evident even in translation is a testament to Srinath Perur’s lucid rendition: one hardly remembers that the book under review was originally in the Kannada.

My major quibble with the novel is that the narrator’s depth of insight into his own situation unfortunately results in episodes where the reader feels led by the hand. The description of the ant menace in the old home, to cite one instance, interprets the characters and incident for the reader and almost acquires the status of a commentary on the novel. Even as it establishes the preservation of the family unit as the highest value to which a member of the household can aspire, the narrator’s extended reflection on the incident makes what would otherwise have been a beautifully understated allegory verge on the obvious. Apart from these minor objections, however, this reviewer found Ghachar Ghochar to be a highly accomplished novel, and one richly deserving of a large readership.

Anibal Goth is a student in the MA programme at the Department of English, University of Delhi. His inclinations draw him primarily to continental philosophy, European literature of the early twentieth-century, and the contemporary novel.