Kitaab International, an independent press based in Singapore, has been building a reputation for publishing diasporic desi voices deserving an audience. When the evocatively titled Gariahat Junction landed in my mailbox, I was eager to discover Rituparna Roy’s debut fiction within this slim volume. 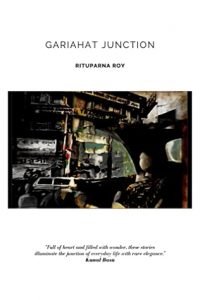 Gariahat Junction, as those familiar with the Kolkata landscape already know, is a bustling marketplace at the heart of a commercial district, spilling over with sari shops and food stalls and roadside vendors. This is a cacophonic junction that brings together the old curmudgeon and young schoolchild, the college student and the trousseau-shopper, the office workers and chaiwallas…in short, it consists of a cross-section of Kolkata life.

In the nine short stories presented in this collection, Roy narrows her focus sharply, to the exploration of the inner lives of middle-class Bengali women. Like women everywhere, these women juggle a work/life balance, until the constraints of tradition and the Bengali bhadrolok mentality fetters the women in ways they cannot transcend. Prurient are the sexual mores that stifle desire, or even the glimpse of a bare body, as hormones rage in A Phone Call:

Rakhee could deal with the bare human body as long as there was a safe distance. She admired its representation in art – though she was drawn rather more to the beauty of the female form. And of late, she was obsessed with the idea of love-making. A sad obsession, as she had no lover. Totally inexperienced about sex, but dying to know all about it, she now fell back on books and especially films to illuminate her on the subject. It was thus that she came to enjoy the love scenes in English films with guilty pleasure.

As Rakhee struggles to accept the “public” nudity of her friend posing as an artist’s model, there is perhaps some homoeroticism, but the narration is as restrained as the character:

That one hour (or was it two?) was an ordeal for Rakhee. She was highly uncomfortable in the presence of such exposed flesh. It kind of hit her in the face – both Sharmi’s nakedness, and the fact that she was so very beautiful. Sharmila had always been pretty for as long as Rakhee could remember. But without her clothes, she was absolutely stunning!

I found the strongest story in this collection to be The Housewife, which was first published in Jaggery Lit. Ruplekha, a trailing spouse in Amsterdam, wrestles with the challenges of anomie and exile as she aimlessly wanders through the art galleries of the city. Then, a serendipitous turn into the Amsterdam Historisch Museum leads her to an epiphany:

What was great art all about? What were the trackless centuries full of? – Mundane, everyday activities. Getting on with the business of living – eating drinking and working to make a living. … A bowl or chalice with was not just an object to eat or drink from– it said so many other things. And each remain stamped with its own story, generations or even centuries, later.

Ontological questions lie at the heart of the title story, Gariahat Junction, the junction is both literally and metaphorically evoked. Katha is a woman trapped in a taxi in the rush hour jam:

In almost all the stories – A Langorous Afternoon is the only overtly sexualized exception – the women in Gariahat Junction struggle to express individual desires within the choices allowed to them, whether in Bengal or the diaspora. Madonna and Child is an evocation of Indian society confused by changing gender norms. Dancing Queen is an examination of the globalized marketplace challenging Indian families in interesting ways.

Gariahat Junction is a lyrical debut by a promising writer. I look forward to reading more of her work.

Dipika Mukherjee is the author of the novels Shambala Junction (UK Virginia Prize for Fiction), and Ode to Broken Things (longlisted, Man Asia Literary Prize). Her short story collection is Rules of Desire (Fixi, 2015) and she writes a literary column for The Edge in Malaysia. She is contributing Editor at Jaggery Lit.