When it rains, the tall, thin palm trees blur in the horizon. At five in the morning, the single florescent light in the hostel room flickers on. An ant crawls across my laptop screen. Hundreds of dragonflies hover in the air above the flower market. A white cow, ears like a puppy dog, trots languidly beside the road.

I learn how to scrub laundry against a stone and how to eat with my right hand. Bats swarm in the purple evening. Machetes. Motorcycles. Cane sugar, sweet corn, coconuts. The auto-rickshaw which I ride every day for ten rupees per kilometer. Inside: glossy photographs of 80’s Bollywood actors in opaque sunglasses, decals with Ganesha, and Saibaba, Bob Marley, and “Jesus saves.” 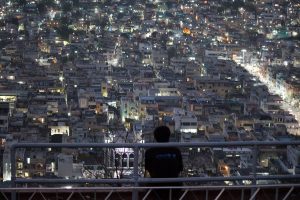 The temple and its combined odors of incense, manure, and blossoms. Mounted ceiling fans rotating over the family portrait of Shiva and Parvati. I walk through the rooms: a ceremonial fire burning, a pair of shirtless Brahmins building a small mountain of chrysanthemums. A handful of fragrant lemon rice, a pewter bowl filled with camphor, a man singing along to an electronic recording of a Telugu mantra. Durga lying in oleander, her face black, eyes spots of ochre, and along her tarred neck, a garland of raw, whole carrots. On the road immediately outside the temple, a dead cat lies splayed, blood and brain matter emerging from a wound along its face.

Strange, to think I came to this country, at least partially, to understand my Rajasthani father and have found so little here that reminds me of him. Sometimes I do think I notice him, in the taste of raw tamarind, which is midway between citrus and brine, or in the expression of a child who could have been him half a century ago. But most days I am a stranger among strangers.

Moonlight, bruised, crests over the hills as my friend Niharika, whose name means “morning dew,” pauses at a roadside stall to buy chicken pakora. Mangled clusters of chicken breast, dense with bones thin as strands of hair, chickpea flour, and spices in dissolution are deep-fried in flaxen oil, and then adorned with circlets of lilac-white onion and lemon slices. The process is quickly and nimbly performed, and we watch it unfold under the light of a single buzzing fluorescent bulb. The street vendor, identified as a devotee of Ayyappa by the smear of red between his eyes, pours the mixture into a newspaper cone with uncommon deftness and delicacy, as though arranging long-stemmed lilies.

A laminated print-out affixed to the stall informs us that “PayTM,” a sort of Indian PayPal mobile app for micro-transactions, is accepted in lieu of cash. Across Andhra Pradesh I’ve been noticing this new millennium spin on everyday tradition: Facebook pages for temple sites, color televisions in distant villages fenced in by slim coconut trees. This union of the digital and the ordinary feels intentional, but natural, somehow: a marriage of wild and wireless. I imagine an appearance of the goddess Durga, astride a collared lion, her many arms wielding a trident, thunderbolt, lotus, sword, and cellphone. The father, the son, and the semiconductor.

Niharika and I, chicken pakora in hand, make our way up the hillside for a nighttime walk. Though I quickly find myself straining to climb, the change in topography does not seem to have daunted the locals. Along the incline their many houses rise like segments of a labyrinth from the darker Grecian myths. That mood particular to twilight, sulky and foreboding, has descended. Add in a few gray clouds, a scattering of English wildflowers, and this could be King Lear’s cliffs of Dover. 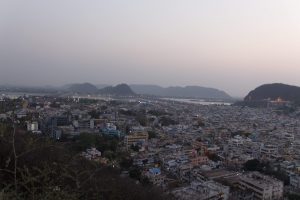 For me this is a journey through memory. Looking for my father, I peer briefly through an alleyway and am instead reminded a different place entirely: Gion, in Kyoto, where slim, forest green wood-paneled streets would terminate in urns of veined marble, or with a sliding door, opened noiselessly by a silent geisha. Here, the gaps between houses are lit by ochre-toned bulbs, and feature pools of filthy, yet luminous, water encircling sleeping dogs. The occasional woman, barefoot and wearing a sari of patterned cotton that reveals the midriff but conceals the shoulders (a contradiction in modesty that I like to call “the paradox of the Indian crop top”) leans out of a window to look at me with a blend of curiosity, restraint and a third quality I have not yet been able to name.

The color palette of the houses is dilapidated peaches-and-cream: exterior walls in coral pink, white-hued green, with the paint blistered in several places from floor to roof. But it is the kind of decay that suggests not death but the necessary experience of life. I feel an expansiveness, as I stand atop a cascade of stairs, that brings to mind walking through soft yellow Ohioan wheat fields with my father at dusk, a recollection from early childhood I’ve not had in years but that emerges now, fully formed. A sense of distance being eclipsed, and of time acquiring the viscosity of a gelatinous physical solid. When I focus again on my surroundings, it takes a moment to locate Niharika, resting against a building a few steps above me. 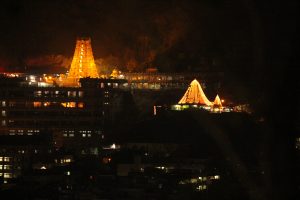 Halfway up the hill, we come across a tiny temple, shuttered closed for the night. To the immediate right is a mural of Durga killing the demon and sticking her tongue out. The temple is labeled on Google Maps, a revelation which does not faze Niharika in the slightest but leaves me feeling intensely incredulous. But, then again, if Notre Dame, Giza’s pyramids, and Mount Everest are on the web, then why not this Perhaps it is only appropriate that this be the way to achieve modern godhood.

Niharika pulls out her cellphone and plays a song from a popular Telugu movie that she knows I love. We listen in companionable silence, sitting by the temple in a darkness broken only by the yellow-orange lights from the city below. After a few moments, she rises, brushes the dust off her jeans, and begins the descent back to the main road below.

My mind suddenly travels to the poem by Li-Young Lee, “Visions and Interpretations,” which starts: “Because this graveyard is a hill / I must climb to see my dead, / stopping once midway to rest / beside this tree. / It was here, between the anticipation / of exhaustion, and exhaustion / between vale and peak, / my father came down to me / and we climbed arm in arm to the top.” But if my own father were here, I know he’d be two steps ahead of me, walking in short but quick, unflagging strides; he always did move at a pace that was difficult to match.

Lessons from the Serpent King

The moon over the dam is brick red and pockmarked with deep scarlet indentations. But as we make our way back towards the main road, I look up during a conversational lull to find its color totally altered.

“Hey,” I say, turning from the window to Sasanka’s profile, “how’d the moon turn so yellow?”

If he notices the perplexed tone of my voice, he gives no indication. He barely glances at the moon. Instead, he shrugs, unperturbed, as though nothing unusual has transpired. “You’ve never seen anything like that before ” he asks. 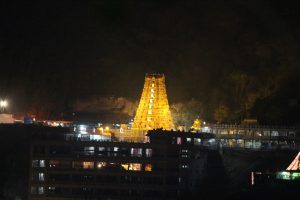 We continue driving by the river, which is visible only through the reflections of moonlight that pattern its surface in crenulations. On a different evening, we are returning from a day at the lake and, as Sasanka pulls into the gas station to refuel, I notice a fire on the horizon. The dark silhouettes of palm trees are outlined against the growing blaze. The nighttime, like crushed velvet, is nestled around it, soft and eerie. Again, Sasanka is nowhere near as mesmerized as I. He coolly points out that, during this time of year, it is not unusual for farmers to burn their excess hay to fertilize the ground for the coming year.

I think back to a story Satya, whose name means “truth,” told me, featuring Lord Rama and his disciple, the monkey god, Hanuman. Rama is approaching the natural end of his life, but the god of death will not come as long as Hanuman guards the lord. To distract Hanuman, Lord Rama drops his ring deep into the earth and sends him to recover it; Hanuman arrives at the tunnel’s end only to discover a whole mountain of rings identical to the one that was dropped. When he asks aloud which ring belongs to his Lord Rama, the voice of the serpent king materializes from the darkness to respond: “which Rama “

The serpent king goes on to tell Hanuman that every generation a ring falls from above, and, when a monkey comes to retrieve it, on Earth, one Lord Rama dies. When I remember this story, I think of myself one week ago, and that state of mind that allowed me, capriciously, arrogantly, to trust in permanence. But the truth is, my memories of those ninety-degree noons, the peach and cherry-colored clouds casting jagged shadows over the hills, are already beginning to fade. Even the images of Satya and Sasanka have started to wilt under the weight of an encroaching season of mangoes and new obligations of emotion that no longer include my presence.

“Which Rama ” is meant to be a lesson on reincarnation, but, for me, it is most applicable as a lesson on letting go.

Emma S. Marcos is a graduate student living in Tokyo.