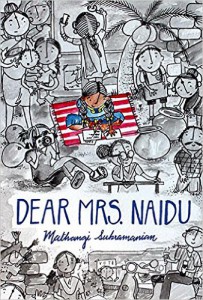 Twelve-year old Sarojini lives in urban Bangalore with her mother. The father is absent, having abandoned the family ten years earlier. In Sarojini’s words, “He might have started another family, probably with a lot of sons. Amma never talks about him. And I don’t ask.” Amma works in rich people’s houses, struggling to make ends meet and determined that her daughter should get an education.

The novel plays out in letters that Sarojini writes to her long-dead namesake, the freedom fighter and poet Sarojini Naidu. Obviously there is history and backstory aplenty here, giving rich context to the protagonist’s own ordinary life. In this context, the epistolary form is a skillful choice. Because of the form, and especially because of the young letter-writer’s clear and resonant voice, historical and family backgrounds do not for a moment interrupt or overwhelm the main story’s progression.

And then there is home, that place where the heart resides. Sarojini is well aware that “even though a place can have a lot of problems, it can still be home.” And the narrative doesn’t flinch from facing those problems. None of it is sentimentalized, and there’s no moralizing either. A sense of the divisions between classes and people of different faiths is cleverly laid out, emerging organically from within the relationships amongst the characters. Among Amma’s employers is a prominent city lawyer, “Vimala Madam,” whose formidable presence Sarojini at first tries to avoid. Then there’s Sarojini’s best friend Amir, who is about as different from her as he could be. As Sarojini puts it:

I’m a girl and he’s a boy.
I’m a Hindu and he’s a Muslim.
I’m an only child and he has two brothers.
All those opposites don’t matter, though, because
inside we’re the same.

When Amir moves to a new private school, however, he appears to have crossed a great educational divide that can’t possibly be bridged. The system, set up to get poor children into good, private schools, is so enmeshed in corruption and bribery that the latter seem unavoidable. And so it happens that when Sarojini’s strong internal sense of justice and fairness run headlong into nasty reality, there’s a mechanism of coping the novel sets in place for her. With nowhere to turn, and when the school letter-writing assignment comes to an end, Sarojini just keeps on going. She can’t seem to stop writing to the late Mrs. Naidu.

What begins as a school assignment becomes the life-changing journey of a most endearing narrator. Sarojini bends her energies toward efforts to implement a law mandating a quality education to students attending government schools. It’s a transformation that feels both completely logical and plausible even while being pitted against impossible odds–a perfect fictional conundrum. Sarojini’s story is enriched by a loving and loveable cast of secondary adult and child characters–her friend Amir, her irrepressible ally Deepti, and the aunties–acting individually and as a bloc. Amma and Vimala Madam come to life as well through Sarojini’s evolving narrative. As she comes to inhabit her own life more fully, she in turn depicts them, in her letters, with increasing subtlety.

Subramanian’s writing is often wry, tender, and funny. One especially lovely typographic conceit that plays out through the book is the use of strikeouts to show Sarojini’s shifting perceptions. She uses them to navigate the correct protocol for addressing a dead person:

I think since you are dead
passed away no longer alive historical, maybe,
technically, you are not like other adults.

But this delicate search for the right word comes into play as well when she’s bracing herself for the next crisis in her own life:

Did you ever losegive up hope, Mrs. Naidu?

We don’t often ask children for their perspectives on the books we aim to write for them. It struck me that this was a book about a child who took charge of her own life when the adults around her were incompetent, uncaring, or helpless. I took the liberty of sharing the book with a 12-year-old reader whose family I was visiting. Nandita Shrikhande read Dear Mrs. Naidu in twenty-four hours, in a couple of big gulps. Here is what she had to say: “Sarojini had big dreams and a big heart. She will inspire many other girls with big ideas who want to make a difference in the world.”

Inspiring readers to take action in the real world? In my adult mind, I hadn’t made that particular leap, but there it was, from a reader of Sarojini’s age. The most profound message underlying this gentle, funny book is that you can only change your world if you have the courage to change yourself first. Subramanian manages to convey this vital connection between personal integrity and social change without, in the least, being didactic. Delivered in a child-sized package, the book never condescends to the reader. The genius of Dear Mrs. Naidu lies in the clarity and conviction of its young protagonist’s voice, in its clever twists and turns of plot and motivation, and, above all, in its pitch-perfect depiction of a very particular, idiosyncratic community of people. I found it a delightful read.

Mathangi Subramanian is an Indian-American author, educator, and activist who splits her time between Delhi, Bangalore and Washington, DC. She has been a public school teacher, a policy advisor, a children’s media specialist. She’s also the author of Bullying: The Ultimate Teen Guide. Dear Mrs Naidu is her first novel.

Uma Krishnaswami, the reviewer, is the author of over twenty-five books for young readers, including picture books, chapter books, early readers and middle grade novels. Her chapbook, Book Uncle and Me, won the Scholastic Asian Book Award and the Crossword Award in the children’s category. Uma lives in Victoria, British Columbia, Canada. Uma is on the MFA (Writing for Children and Young Adults) faculty at Vermont College of Fine Arts, Montpelier, VT, USA.