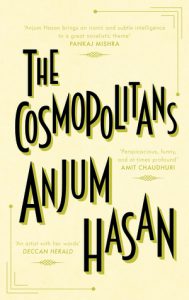 Reading Anjum Hasan’s novel, The Cosmopolitans, took me deep into the heart of the art circles of Bengaluru, not very different from the shows I had attended as an art student in Mumbai in the 1990s. Hasan understands art and she has beautifully portrayed artists and the art fraternity in the novel.

Qayenaat is a refreshingly different protagonist. She is not the typical Indian woman. She is fifty-three years old, single, keeps in touch with her ex-boyfriend, is not afraid to take on lovers and doesn’t have a religion. She does not have a steady job but has an intense love for the arts. She has no last name, she lives in a house her father built, values her friendships, her independence and lifestyle even though it goes against the grain of traditional Indian society.

She had never wanted any children, did not care to reach hard-won adulthood and then start all over again through the life of a child.

In an interview with India Today, Hasan says: “I wanted to write about the inner world of an older woman, but I did not want it to be limited to the domestic, which is what often happens when you write about women…”

Book One opens with famous artist Baban Reddy’s new art installation titled Nostalgia, an artwork on display, that consists of a massive installation of a giant chair and a giant TV set,  playing yesterday’s news in a loop. Nostalgia is a  recurrent theme of the book: there are discussions among the artists and art aficionados about nostalgia. Qayenaat is nostalgic about the time she spent with Baban, when they were young and before he became a famous artist. She clings to Blanche, the house her father built and cannot bear to move away from there. This is a cerebral novel. At the beginning of the novel, there is a lively discussion about the meaning of art among the guests at the art show.

‘When will we stop seeing all contemporary art as the dregs of European modernism? What about our own traditions? Our ancient theatre in which giant effigies are made of gods and warriors, our objects of veneration such as the tree stump or block of stone that can acquire so much meaning by the mere addition of a dab of vermilion or a string of flowers?’

And yet, when a reclusive artist, Nur Jahan, paints nudes, it is considered controversial.  ‘A Muslim woman painting a taboo subject and they were either approving or enraged. They missed the individual choice.’

Qayenaat struggles with her feelings for Baban and her admiration for his art, her journalist ex-boyfriend Saathi moves in with her temporarily and feeds into the debate of art for art’s sake, meanwhile destiny takes a hand and forces her to escape from Bengaluru and move to Simhal, a small town in the hinterland famous for its folk dance and a king, who ‘had nothing to his name but wrecked castles’.

The king with no kingdom is nostalgic for his glory days. Qayenaat’s life in Simhal is very different from her life in Bengaluru. Her mission is to research the folk dance of Simhal and discover herself in the process. She wishes to resurrect a dance form which had ‘lost local meaning and now existed only in department files and for the perpetuation of that dreary thing called Indian culture’.

She finds a glue-sniffing escort who could be her bodyguard or attacker; he is someone she cannot quite understand. The king is in danger: there are whispers of warfare and warnings, but Qayenaat is swept off her feet, and lives in a dream-world of make-believe and lust.

Qayenaat buys into the king’s delusions of being kingly, and suddenly she is faced with a dilemma: whether to choose love and all that it encompasses, or to return to her roots and her cosmopolitan lifestyle by making amends for a crime.

As the blurb says, this is a book about ideas. Hasan points out that this book is meant to be digested slowly because in this day and age, people are used to quick reads. This book does not adhere to the usual formula of Indian fiction. There is much reflect on, be it about art or tradition, women’s empowerment and emancipation. Hasan’s style is reminiscent of John Irving in its surrealistic approach to realism. Humour is laced with intelligence and wit. She picks out ideas and gives them a twist. A person is killed, there is arson and then Qayenaat reinvents herself becoming a king’s lover and acquires a new identity and vision for her future. In the end everything falls into place like a good fairytale and she finds contentment with the one thing most alien to her.

In an interview with Live Mint, Hasan says she wanted to explore the meaning of urbaneness and how money has changed the outlook of contemporary India. She asks: ‘Is this really the norm or is there another way of living? Sophie, the young urban drifter, explores this question in Hasan’s earlier novel Neti, Neti, and Qayenaat takes it up here in The Cosmopolitans, a novel that holds a mirror to the art scene in India. It also is a reflection on the sharp contrasts between urban and rural India, the different ideologies and the status of women in Indian society. Does Qayenaat break the mold, or does she, in the end, succumb to the will of the king? Does a king have a place in modern India? Can there ever be a compromise between the modern and the conservative? By raising such questions, The Cosmopolitans becomes a powerful and relevant read in current times.

Susmita Bhattacharya’s debut novel, The Normal State of Mind was published in March 2015 by Parthian (UK) and Bee Books (India) in February 2017. Her short stories and essays have appeared in literary journals such as Wasafiri, Litro, Riptide, Mslexia, Tears in the Fence as well as been broadcast on BBC Radio 4. She won the Winchester Writers’ Festival Memoir Prize in 2016. She teaches contemporary fiction at Winchester University.
@Susmitatweets
Susmita’s blog.