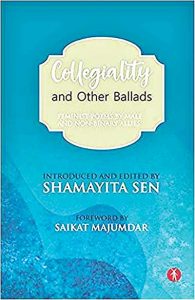 Collegiality & Other Ballads – Feminist Poems by Male and Non-binary Allies is an anthology of feminist poems by male and non-binary allies. In essence, the anthology is a compilation that seeks to amplify women’s voices via members of society that hold socially privileged positions. This initiative of solidarity deserves recognition. However, as the lingo goes, it does not appear that all the contributors of this series “understood the assignment.” In fact, at some points, it appeared as if the writers solely amplified notions of sacrifice and tragedy.

While the book comes off as a solemn declaration of solidarity, there are only select pieces that aptly deliver on the promise. I was hesitant to read through the anthology at first. After all, women are all too familiar with other genders, particularly the male one, taking the mic away from them to narrate inherently female experiences. In all honesty, as I read through, some of my fears were confirmed. The air of wholehearted celebration of women, and feminism in general, seemed to dissipate in the foreword. The editor’s concerns of whether this was the right time to release a work of this form were genuine.

The dragged out and sorry idea of perseverance that is consistently wrapped around women’s throats rises in Paresh Tiwari’s poem “Surviving Marital Rape.” As he ends the poem with the line “Or you could say, ‘No’.” the focus appears to shift from the perpetrator to the victim, especially as it prescribes a scale for the extent of resistance in the intensity of the protest. Though it may well be intended as an expression of the futility of any recourse, it is easily interpreted as once more placing the onus upon women. How many women are all too familiar with the absurdity of this claim? Similarly, Dibyajyoti Sarma’s “In Which Ganga Explains” attributes sorrow and melancholy to the female form. He writes “I’m the despair that gives you hope” and “I’m the mother of everything that decays.” His interpretation of womanhood to be so heavily associated with grief is one that undermines the very purpose of celebratory solidarity.

Another poem that stands out is Chandramohan Sathyanathan’s “Plus-Sized Poem” that attempts to amplify body positivity – but rather fails to do so entirely. While the poet does attempt to step outside the boundaries of the impossible beauty standards that the world has come to expect of women, his focus on physical appearance comes off as more objectifying than empowering. In a sense, the poem resonates with the trope of “you are not like other girls.” Moreover, it carries the implication that women who do subscribe to “offshore liposuction” and, god forbid, do not have pimples can somehow not compete for “international prizes.” While the essence of feminism lies in the celebration of women, all women, without discrimination, it appears that this poem missed the mark entirely.

Moreover, multiple poems are directed at and addressed to women in the context of familial relations – mothers, sisters, daughters, and grandmothers. Given that feminism in South Asian countries struggles to break free from the deeply damaging ideology of respecting women with respect to their male familial relations alone, these works do not work towards demolishing existing strictures of thought. In speaking for women empowerment, the foundation upon which the autonomy of women rests is that they are human beings and members of society deserving of equal respect and rights.

Irrespective of these drawbacks, some pieces stood out magnificently, e.g., Ankush Banerjee’s “Two Women.” It delivers power and magic in one fell swoop. “As I Watch the Road” humanizes women, depicting strength in their tenacity and capabilities effortlessly. In “Burnt Poems,” K. Satchidanandan celebrates love, womanhood and the love of a woman while augmenting the punishment women must endure for simply loving. One of the most powerful poems in this anthology is “Bride Wanted Ads” by Madhu Raghavendra. It depicts the South Asian perception of women and the deeply ingrained misogyny that is particularly highlighted in advertisements published in search of brides. In spite of its brevity and ingenious lack of letters, the poem resonates with the reader as it touches upon multiple issues within the patriarchal society that envelopes us.

For an anthology that was designed to provide a platform for men and non-binary allies to support feminism and women, the pieces compiled fail to adequately deliver. There is a fine distinction between being an ally and taking up the whole stage. In fact, a significant number of poems snatch the proverbial mic away and even take the floor up entirely. The shallow representation of women depicted by a number of authors simply reinforces the experience of being talked over that women are all too familiar with. While my expectations were not high to begin with, I still found the experience quite disappointing. 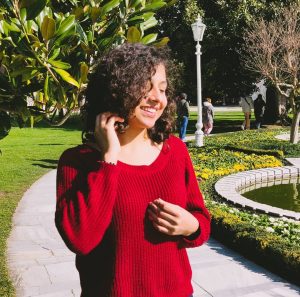 Ghada Ibrahim is a Psychology graduate from Middle East Technical University, a voracious reader, and a published writer. She likes to live with no regrets and has been blogging and writing since the age of 15. Aspiring to publish her book one day, she revels in sharing her love for all things literary with the rest of the world. Her writings have been featured in Mad in Asia Pacific and Bloomer Magazine.