The colour crimson runs like ink across the city of Kohima. Azaleas, the hue of sun-struck rubies, bloom on its porches and balconies. Red Naga shawls dot the cold grey streets, wrapped around women’s waists. From tall branches, bright rhododendrons throb like the heart of the bloody insurgency that raged in the region for over sixty years. Numerous crimson wounds, from battles old and new, stand tall and proud in the monuments, monoliths and memorials strewn across its streets.

On my first and only visit to this striking, wounded city in January 2019, my head was a swirl of crimson even before I’d arrived. Kohima is perched atop the Naga Hills in the northeastern corner of India, at a height of more than 4000 feet above sea level. There’s only one road to get there from the nearest airport, and it’s hours of dust and gravel. I, for some reason, had chosen a little, rickety car for this purpose. Pabino, a stocky Naga man with jet black hair matching his eyes, had convinced me it was a good idea.

On the ride up along the foothills, big yellow bulldozers were clawing out the bellies of the Naga Hills. A two-lane highway was coming up. Fat clouds of ochre dust billowed around me. “The hills here are very soft. The soil comes off easily”, Pabino said, clutching the steering wheel. He spoke a few words at a time, a polite confidence in each of them. Dressed in a blue suit and grey cap, Pabino was a retired insurance agent who drove tourists from Nagaland’s only airport in Dimapur to the capital in Kohima where he worked as a tour-guide. As the car wobbled over the stones, I worried. It was a rattle away from breaking down.

Up ahead, a soldier in fatigues, an AK47 slung over his shoulder, flagged us down. A rusty sign behind him read ‘Police Check Post’. It was the first of several Indian Army checkposts on this road. The soldier, a young Naga man in his twenties, walked over to my window. Anxiety plucked my stomach. I had never seen a gun so close. Pabino leaned out, offering a smile. “From Calcutta”, he said on my behalf in the local Nagamese. I scooped out a greenish slip of paper and held it out. Everyone entering Nagaland, including Indian citizens, needed to have an Inner Line Permit to visit the state. I’d gotten mine after three trips to a dimly lit office in Calcutta. The soldier stepped back and waved the car through. I felt a small wave of relief. Pabino was unfazed, eyes back on the road. Men of his own generation, and those after him, had been shot down in the forests and villages we were passing.

For more than six decades, the Nagas have fought for independence from the Indian Union. After a brutal counter-insurgency operation, insurgent factions, rife with their own rivalries, signed a defining peace accord with the Central government in 2015. While official figures state that about 3,000 people have died in this conflict, unofficial figures put the toll at about 50,000. In the last fifteen years, there’s been peace, or some version of it. The forests are now quiet, beating only with the crimson hearts of blooming flowers.

“Next time, you should come during the HornBill festival,” Pabino piped up, as we drove deeper into the hills. “That’s when it’s really fun.” Home to sixteen Naga tribes –- each with their own distinct language, culture and traditions — Nagaland attracts visitors to the Hornbill Festival held every December. Over the course of ten days, the festival hosts stalls for Naga food and handicrafts, special events with ritual dances, music and songs, wrestling matches, archery displays, chilli eating contests and even a beauty pageant.

During my visit, the only thing on show were the billboards from last year’s HornBill festival. Photos of Naga men and women, dressed in exquisite shawls and ornaments, welcomed incoming vehicles at the mouth of Kohima city which in January had gone back to its everyday life. Roads were potholed, electricity was undependable and water was always in short supply. Inside the city, the Khedi bazaar, where silkworms, snails, crabs, larvae, fish and meat were sold, was shut. Soldiers lounged at the market square, buying cigarettes, keeping watch. School children walked past them in handsome yellow blazers, oblivious to the guns in their midst. Pabino waved and smiled at acquaintances on the road, clearly happy about having an off-season customer. I looked for something crimson at the shops, only to find brooms, ropes, detergent and buckets. The swoosh of crimson returned only for a moment when a traffic policewoman, in a crisp blue uniform, slowed cars with deft waves of her hand. Pursed around her matching blue whistle, were a pair of crimson lips. 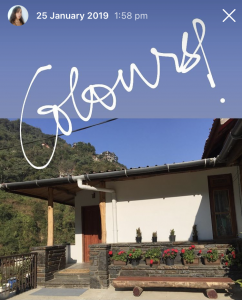 Past the narrow grey streets, a wall caught my eye –- a mural painted with red Naga shawls, a different pattern for each tribe. “Back in the day, you could tell a man’s tribe, village and position, just by looking at his shawl,” Pabino said, glancing at the mural. “Of course, nowadays the young people don’t care to know much”.

Pabino’s daughters studied at Delhi University and visited Kohima only on holidays. I told him about the popular Naga restaurant in Delhi I had once visited that was always bustling with patrons. “Where can I eat a traditional Naga meal here?” I wanted Pabino’s recommendation. He blinked. “I eat my meals at home. I don’t know much about restaurants.” I didn’t know what to say.

The red-roofed guest house where I was to stay stood at the edge of town, surrounded by dark green hills on one side. On its porch, a row of wide-eyed crimson azaleas shone. After helping me with the bags, Pabino lingered. “Trek tomorrow morning?” he asked, his thick black brows rising expectantly. I nodded. We exchanged numbers and then, he was gone.

At the reception desk, two teenage girls, polite to a fault, wrote down my details. One of them showed me my room. It smelled of pine and opened out to bright green trees. I suspected I was the only guest there.

That night, I couldn’t sleep. My bones were cold and the room was too big, too quiet. The pitch black night stared at me from the window. I watched as two circles of light drove down from the top of a dark hill and disappeared behind its back. Crickets chirped. The heater hummed. And then, out of nowhere, a loud BANG rang out in the night. I bolted up, checked the lock on my door. Was that a gunshot? I tried in vain to go back to sleep.

Breakfast, the next morning, was toast, eggs and coffee. Chill-hop floated from the reception desk. I asked the girls about the shot that rang out. They seemed unfazed. “It’s nothing”, Azine, the younger of the two said. “Someone must have been hunting.” Before I could ask who or what, Pabino, turned up, as promised. He chatted with the girls at the reception, humouring them with some silly joke. His laugh, a high-pitched schoolboy laugh, upturned the corners of his eyes. I was struck by the ease with which they spoke. Pabino and the girls spoke to me in English. But when they spoke to each other, it was in Nagamese, a creole invented to ease communication between the sixteen tribes of Nagaland who, surprisingly, do not understand each other’s language. Hearing them talk, I was surprised to hear a few familiar words. Pabino clarified that it was probably because Nagamese borrowed from Assamese which in turn had similarities with my native Bengali. Pleased to have found some common ground, I stepped out into the cold, sunny day.

The trek to the top of Mount Pulie Badze, a walk through a wildlife sanctuary outside Kohima city, revived me. Pabino and I ambled up the forest trail, pausing to read Baptist quotes hung on the trees. The view from the top was magnificent. Unfolding in every direction were rolling green hills, behind which were blue, and then gray, mountains. The air was crisp, and the sun shone bright. Pabino pointed out the little villages sprinkled on top of each hill. I clicked a hundred photos, all of which I later lost.

On the way down, at the base of Mount Pulie Badze, I was happy to see a gathering of people from the nearby Jotsoma village. Preparations were in full swing for a picnic. Women, with crimson shawls wrapped around their waists, trooped in with cane baskets. They had foraged vegetables, herbs and flowers from the forest. The men were roasting a big fat pig to brown crustiness. Water boiled in large pots over wood planks. Children ran around, screaming in glee. I remembered that it was Republic Day, a national holiday. But there was no flag in sight. Just people getting together to cook, eat, drink and chat under the bright blue sky overlooking a beautiful set of rolling green hills.

I stared and stared. All I wanted was to be invited over. No one took much notice of me. Pabino went up to talk to two men wearing red woollen jackets with black and white motifs. I hoped he would broker an invite for me. Didn’t they want to show an outsider their way of life? Wouldn’t they want me to be part of their tribe, even if it was for an afternoon? He came back looking pleased. “They were the leaders of the village council. I told them about the growing garbage problem at the top of Puliebadze. They’re going to look into it.” My face fell. He hadn’t even broached the subject.

I ate lunch alone at the guest house. But before I could finish, a small, round plastic tiffin box arrived at my table. It was stuffed with fried green mung beans and shredded pork, tossed with flecks of a crimson chilli, possibly Naga mircha. Pabino had sent it.

I spooned out the beans, wondering how tribes became nations and if nations should become tribes. As I ate the first mouthful, sirens went off in my brain. My tongue was on fire. Naga mircha is one of the hottest chillies in the world. My nose burned, eyes watered. In the blur, shawls became flags, wounds became flowers. I couldn’t speak. Nothing made sense. Azine came by with a glass of Zutho, homemade rice beer. It was cold, frothy and sweet, the perfect companion to the fiery red chilli. As the zutho cooled my throat, the colour crimson reappeared, this time, hot and flaming on my tongue. I was overwhelmed. I had not expected that crimson, in my mouth, would taste so much like kindness. 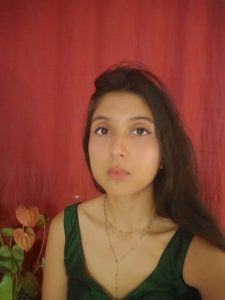 Biaas is an independent writer, researcher and producer. She lives, works and shape-shifts between Bombay and Calcutta.