“Here is your medium dirty chai tea latte,” the friendly barista squawks to the customer next to me. I bristle visibly as if she’d cursed at me. My immediate physical reaction can be chalked up to a few things:

It’s six on a Monday morning and I firmly believe certain pitches and intonations should be avoided at that time.

Chai tea latte is redundant as anyone who grew up in a South Asian household knows. Do you call it pomme apple pie? 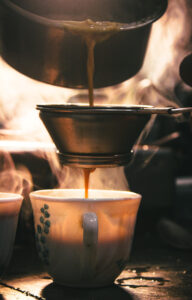 I can’t stand the smell of chai.

In my house, chai was made twice a day without fail. My mother and father engaged in the ornate artistry of permeating cloves, cardamom, cinnamon, and ginger into boiling water, whisking in milk until it turns the color of sand, with none of the sense of urgency exhibited at a Starbucks. They drank it at a temperature that I usually associate with second-degree burns.

I tried my hand at making chai a few times, but my mother made it clear I had no natural knack for the endeavor. Since I never drank chai, I likely couldn’t appreciate the nuance of the extra cardamom pod or spill of sugar in the roiling pot. When I was ten, it was just one of the many ways I disappointed my mother.

My father always made the morning cup. This was controversial. A newly acquired friend who came over for a sleepover whispered to me over our morning cereal, “I can’t believe your dad is making chai for your mom. While she is in bed. And then taking it up to her while she’s in bed. That would never fly at my house.” I couldn’t tell if she was more disturbed by my mother’s behavior or my father’s. But I did sense this was a non-traditional scene in an Indian household. To my fourteen-year-old eyes, this fit our household dynamic. My devastatingly beautiful and fiery mother and my coolheaded if timid father; my mom the spice, my father the milk.

My mother made the weekday afternoon cup of chai and drank it alone. My father would be at work, while as a homemaker my mother had her afternoons for her quiet savor. I would come back from school to the redolence of chai still hanging low in the air, like my mother’s presence. At twelve, I wished to come home and find both absent. I wanted to read fashion magazines, talk to boys, and talk about them with my girlfriends. Instead, with my mother home, I knew I had to do my homework, after which I could go play with my friends only until it got dark. And talking to boys was out of the question. After all, the neighborhood ladies were watching. And I knew I had to make my mom proud. Or at least not give her any reason to be ashamed. I had to be good, smart, and virtuous. The weight of her edicts blanketed me like the dense and pungent aroma of her favorite beverage. The spice in the chai, that’s my mother.

Why is a smell so closely associated with my childhood so discomforting to me? Shouldn’t I find the familiarity of the smell, the making of chai, grounding? At fifteen, having immigrated from India to the United States, I didn’t appreciate that my parents still clung on to their daily chai ritual, like they did so many other traditions. To them, it was an homage to home. To me, it was making my life difficult. This was before golden lattes were the latest health craze. The white kids in North Carolinian suburbia, who already looked at me like I was out of place, weren’t going home to the smells of cardamom and ginger. They went home to the clean smells of peanut butter and jelly sandwiches – the smell of freedom and fitting in. And at a time when belonging seemed more important than comfort, my parent’s unswaying and painfully ethnic routines felt more like a bear trap than a lily pad.

At nineteen, I took a one-way trip from home, and never turned back. Cities, countries, continents – I traversed all the boundaries that would help me shed the smell of home. The edicts, the what-would-so-and-so-think; I wiped hard at any reminders of home that lingered. I needed a fresh scent. I became a coffee drinker, which I could never once try at home. Coffee tasted like adventure; its bitterness fortified me. I drank coffee in Turkey, in Austria, in Sri Lanka, in Italy and everywhere else I could. I was out in the world, I could drink coffee, and I could be anything I wanted to be.

But no one tells you freedom isn’t truly free. It asks for something in return. Without the traditions I begrudged my parents, I was like a kite without a string, floating transiently with no sense of direction or cause. Out in the world, with no whiff of home on me anymore, I was lost. “Be careful what you wish for, because you will get it,” my mother once told me. I had wanted to shrug off any scent of comfort, culture, and connection so badly, but what was left of me then? I could do whatever I wanted to do. But what did I want to do?

At twenty-five, I looked for partners who would travel the world with me. From the beaches of Nicaragua to the castles of Scotland and everywhere in between, we hiked mountains and went deep sea diving, stopping for coffee in between. But now scentless, I was lost in the scent of others. I had fought so hard to leave my anchors behind, in mortal fear of being weighed down, that I found myself at sea, on a dinghy, waiting for a rescuer. Again, I had gotten what I had wished for. These partners, these co-adventures, these rescuers, travelled the world with me, but when we were home, on the couch, sharing a morning cup, or really doing nothing at all, we didn’t know who we were to each other. I didn’t know who I was to myself.

Even while the smell of chai is one I have yet to love, when I go home these days, I find something comforting about the ceremony. My father, now retired, also makes the afternoon cup that he takes over to my mother as she sits on the timeworn grey couch in our living room. My diplomas from college and graduate school bedazzle the wall behind her. Her beauty lingers behind creases on her forehead and neck that have stayed behind even as her overbearing worry about securing my future has dissipated. My father settles into the chocolate-hued grandfather chair next to her. Our dog, knowing the ritual as well as them, waits to find his place in my father’s lap. They sit in silence for the most part, other than a few exchanges about things mundane to my ear.

I wonder how much of their thirty-seven-year marriage was fostered by the intimacy of this simple routine amidst the chaos of their immigrant lives raising two children. I now find it beautiful the way my father always makes the chai for my mother, a small gesture for the ways she put her life on hold so he could have a career, and his children could have a present mother. The piquant aroma of chai drifts over to me, offending my nose, but I ignore it in favor of the sight of my parents, healthy and together, savoring the spices of their childhood as they hold them in their hands a thousand miles away from home. Maybe I was in the cup too, the tea leaves that inked through the water, nothing on their own, but with the spices and the milk, they made a tasty cup. 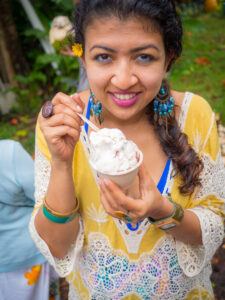 Archana Ramesh is an Indian-American writer who loves combining her zest for exploration of the world, and of the self. As an immigrant and third-culture kid with a hyphenated identity, Archana likes exploring questions about belonging, identity, and transience through fiction and non-fiction writing. Her essay ‘Somewhere in Between’ was runner up in The Preservation Foundation’s 2021 non-fiction contest.