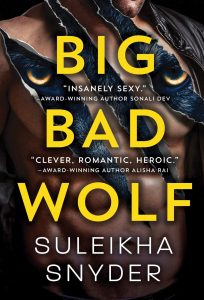 “‘It’s not like I haven’t dated bad boys before,” she pointed out,” like “the L-school douchebag who now worked for the Republican Hindu Coalition. Gross.”

It’s 2021, Trump’s vision of America is well on its way towards coming to pass, and Neha Ahluwalia can’t figure out why she’s so attracted to Joe Peluso, a wolf-man she knows to be a killer. Despite growing up in a loving home with non-judgmental parents, she is willing to throw away her years of experience helping people as a psychologist and a lawyer to help Joe evade the mafiosos who want to kill him – and over the course of this very hot book, she realizes that perhaps it is because of the love and the lack of judgement she carries within her that she can make the choice to fight for someone so different. Worth it for the conversations about interracial relationships alone, Snyder’s first foray into paranormal counters assertions (https://www.bitchmedia.org/article/own-voices-indian-romance-novels-limitations) that all Indian American #ownvoices romances are palatable love stories for white audiences.

“That was who Neha was. A woman who had lines she wouldn’t cross. Joe’s entire life was about erasing the lines. Kicking dirt over them. Covering them in blood.”

Snyder is known for her high-stakes interracial pairings; her protagonists have fallen for their stepbrother chefs, their vice-presidents, and perhaps most prominently, their local biker/Chris Evans lookalike. In Tikka Chance on Me, the white biker is revealed to be not quite what he seems, but in Big Bad Wolf, we get no such relief: Joe really is a killer. And the world, too, is relentless: Trumpism has prevailed, and though as a wolf-man Joe faces discrimination of his own, there is no “Jess, I’m Irish” resolution. Neha and Joe bond over their Queens background, her with a Sikh Auntie brigade and his with tales of making out and more underneath the bleachers at Aviation High, but Neha’s brownness isn’t just some ethnic flavor: her survival as a brown woman in America provides her with the hope she needs to save both their lives. Neha both lusts after and loves Joe, and in between the gunshots and the romantic banter – both simultaneously bonkers and on point – she has to figure out how she is going to survive a life so engulfed by and enmeshed in whiteness.

Despite that thorny central issue, this is New York City, so there are relatively few white people in the book; as this is the first in a series, part of the fun here is getting acquainted with characters we can only hope will be featured next. As a fellow girl-who-counts-her-cousins-as-confidante and desi raised on stories of Uloopi, Chitrangada, and other sea-snakes, I’m hoping to see more of Naga shapeshifting twins Tejal and Toral; though Neha’s bosses Nate and Dustin are already a couple (and reading their support for her as she makes some seemingly dodgy choices is as comforting as a weighted blanket), her eventual top-secret justice brigade coworkers Grace, Elijah, and Finn are promising (with Grace, a Black doctor and excellent shot, hopefully arriving first). I found a resolved subplot between a Korean-American cop, Danny, and an unwilling Ukrainian criminal, Yulia, to be the least compelling part of the book – though the subplot was necessary for the plot, I’d have bought this as a novella and been just as happy – but the links between Danny and Neha present a slew of related stories. And despite the good news this election day, while Trump’s ideas still hold sway in any quarter, we’re going to need them.

“Exuent, pursued by a werebear,” she thought with a lunatic giggle. Because if you couldn’t reach for your college Shakespeare when you were about to die, then what even was the point?” 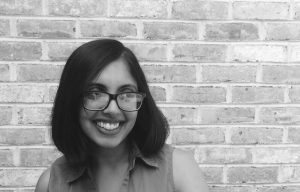 Rashi Rohatgi is a Pennsylvania native who lives and teaches in Arctic Norway. Her writing has appeared in, amongst other venues, The Toast, Wasafiri, and Electric Literature. Her recent short story, “A Year in the North,” was a finalist for the Prime Numbers Magazine Short Fiction Prize, and was nominated for a Best of the Net Award by The VIDA Review. She has served as an intern for Ayesha Pande Literary, Reviews Editor for Africa in Words, and Fiction Editor for Boston Accent Lit, where she convened the Accent Prize. She is a former AWP and Binders mentee and a Bread Loaf and VONA alumna, and a current reader for The Rumpus. Her translation of the seminal Mauritian novel Blood-Red Sweat [Lal Pasina] will be released in 2020 with Prabhat Publications, New Delhi. Her debut, Where the Sun Will Rise Tomorrow, won the Galaxy Galloper Novella Spectacular Award, and was published through that press in March 2020. She is currently at work on a novel.