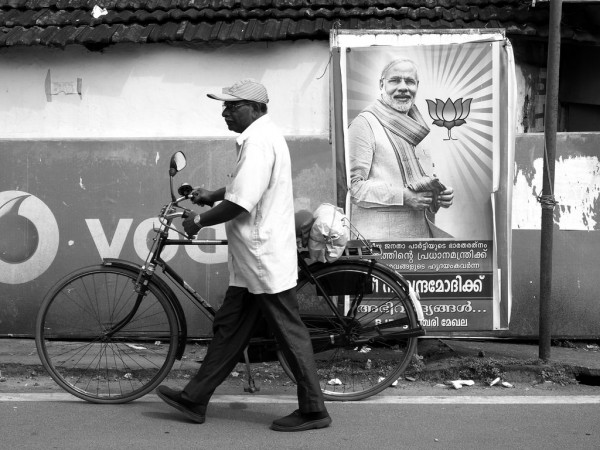 The purple smear of your fingers still lingers
on the back of your wife’s hand. The rice
was too yellow, you said, and the daughter’s
ankles too thick. You step out into the raw
brick temple, rain-shorn, and bow in reverence
to an abscess adorned with flower, fruit, abundance.
You slap the back of the priest’s shoulder;
he was schoolmate first, emissary next. You mark
your temple, grab your leather slippers, smirk
at an old woman stroking your shoulder in exchange
for alms. Your war paint has no gaps.

When you lift the machete hidden under your shirt, the manager
at the theater gasps. Your accomplice has pried
the film roll from the back-arena, and you strike
it repeatedly, as if chanting a hymn. Lemon, you
call the hero (extra-terrestrial or atheist or both)
and gouge his face off every poster. The local
youth-wing leader is calling your phone,
and the screen reads

What deity governs this smelting
ore-slogan, heresy-talk, and your face
on a TV somewhere, deep in the rural
heartland, exclaiming

You have returned for lunch now, and even the water
isn’t whiter, the silence of your
hunger heavy as the runts wait for you
to rinse your hands before they bring out plates,
and your wife busy with ladling out your leftovers
to the mendicant woman, unsure if she will have

anything to relish later except the metal of blood
or well-water in her mouth. She will watch the movie
later and laugh where the hero curves his mouth
into a naked smile,

and guffaw when he pulls
the gods of your imagination off the shelves,
disrobing them and casting his mirror back
on their cracked eyes. She will see you then,
once, closely, but never again

Ranjani Murali is a Chicago-based writer and artist. She received her MFA in Poetry from George Mason University. She currently manages communications for a nonprofit serving LGBTQ+ youth across Illinois. She is the recipient of fellowships from the Vermont Studio Center and the Fine Arts Work Center. She won the Srinivas Rayaprol poetry prize in 2014 and Almost Island’s inaugural manuscript prize in 2015. Her first book of poems is forthcoming. Her work has appeared in Phoebe, Eclectica, Cricket Online Review, Word Riot, and elsewhere.

1. Reasonable use lines from the pictures. All writes reserved. Back