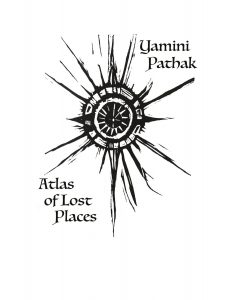 The dichotomous rivers of love and sorrow flow seamlessly in the countries, birds and poems of Yamini Pathak’s debut chapbook, Atlas of Lost Places, published by Milk & Cake Press. The poet expertly displays her love of language in free verse and established forms alike, and this makes her lush poetry a delight to read. She even invents a form – a field guide – to describe a bird, a creature known for its transience.

As immigrants, we never stop looking for that place called home – when we find it, we long for what we have lost. And when we go back to what we left behind, does change triumph over familiarity? We wish to bequeath our home to the next generation, but will our children truly inherit it? These are some the themes explored in vivid and masterful detail by the poet. The poems are rich in imagery, they capture the myriad emotions the poet experiences, in a raw earthy way, enmeshing them in sensory details and metaphors. She creates a travel guide through her world, and we the readers, follow her path – we are lost, then found.

As in ‘Ahimsa,’ meaning non-violence, the irony comes through with the power and violence conveyed in the lines. It startles the reader – this kind of cruelty in love, the bonds of possession, a one-sided quest to belong to someone, or something; the fight for making a difference in her own life. There is a quiet strength, a force, that pushes against what is impossible to attain or defeat. This duality of the love and destruction is what makes this poem stand out.

“Would you judge me a fool if I said my love/is a parched well that never quits reaching for the aquifer?”

The different shades of love emerge in the second poem, ‘Geography of bedtime.’ Love in this poem is of a different kind, where the geography of a place really begins to shine through. When we think of Pangaea that moved and morphed into different continents, sharing a common origin – isn’t the experience of motherhood the same? What is unfamiliar for the mother is the most familiar for the child since that is all he/she has known. Whereas for the one holding, birthing this is all new territory. Yet “my skin knows his body on a cellular level” – as if it has known all along. How this bond strengthens even when the bodies are separate and the geography changes again – because the child and the mother are now transported to a “borderless town in a country all our own”.

My personal favorite is the ‘Ghazal for the Children Born Far from Home’. A beautiful poem of lament from a mother to a child, born so far away from home that the child has no real country. The mother comes from a country where rotis are gathered for stray cows, and rice for the crows. But when she emigrates to a different country, she “severed you from old ways.” Where food is eaten by hand to savor its real taste. Where the old myths that have passed down through ages, are now only ghosts that don’t stir their imagination. In Hindi, the world “kal” means yesterday and tomorrow depending on the context in which it is used. But they are exiled from it, and in the process, they “wander thirsty with no tongues”. The repetition of the sorrow builds up into a frenzy –a climax where the mourner realizes that her child only has her own body to call his true country.

There is so much movement, that makes the writing vital and dynamic. In ‘Jetlag’, time becomes a different reality as the plane lands in the pre-dawn to “a billion sleeping breaths”. The birds emerge again – this time a brain fever bird, also called a hawk-cuckoo, native to India in its mating season hidden among the green mangoes – a bird that lays its eggs in another’s nest. I find the poet’s choices of birds interesting as in her invented form of poetry – the ‘Field Guide to Broken Birds’. This time, it is a common sparrow, injured and maimed. Or in the title poem, Popat, the parrot. The mythical gryphon beating its wings in the speaker’s chest. Even if native to certain countries, they fly away when the migration fever hits, and may or may not return for good. This is the speaker’s predicament.

Slaughter threads through the sorrow in the speaker, in the poem, ‘Bazaar’. While the title brings to mind eager hawkers, shoppers and haggling, one cannot forget the animals that dot the landscape – the sand-colored camel, or the innocent lamb. That for some, to open the gates of heaven, charity and prayer are represented by violence. We feel the speaker’s dilemma as to how to come to terms with this ritual.

The class divide is more than apparent in ‘In Rough Hands’. How is it that within a country, there are several other countries that people inhabit by dividing themselves into castes, socio-economic classes, religion? How can this innocent play date with a girl aptly named Kajol, for the kohl in her eyes, turn into a scene if found out, by the ‘smells of petrol and poor people. And how long can this friendship possibly continue when people change, countries change?

In ‘13 fears’, the lump of fear chokes in our throat with each bullet point in this heartbreaking list. Even if the speaker says they are in no particular order, we readers can piece them for ourselves.

There are plenty of references in ‘Elegy for the way home’ to Hindi words which the speaker obviously misses because they don’t cross her tongue any more. Like the cutting sting of mangoes during mango season in May, “aam” meaning mango and common, like how certain rituals were the norm – sitting cross-legged at your parents’ house and sucking on the juices. How “uttar” means North as well as answer. Or “parsaun” means the day before yesterday and the day after tomorrow? How will the children born of mothers who live elsewhere ever appreciate these peculiarities?

The poet pays a tribute to the triolet describing the sorrow of the women with the ‘unopened wombs’ bringing their desire and despair to the tomb of the Sufi saint, Salim Chishti. In a country where being childless is considered the fault of the woman, this struck me hard. Another social evil is touched upon in the ‘Manifesto for the Indian widow who wishes to live,’ where there are references to so many creatures – birds, insects (cockroaches, praying mantis). The imagery of this poem is stark and marvelous. How in small towns, especially Banaras along the river Ganges, young widows are cast out of society with no possessions, nothing to remind them of their short-lived married life. The poem becomes powerful with its ten-step manifesto style of writing – another salute to the listicle.

There is some levity and room to breathe in ‘At the Nail Salon…’ and ‘In my own skin.’ But the poet whose birdlike mind is forever flying, seeking, bids adieu in ‘The Long Goodbye,’ to a lover, a love, a past, a present, where ‘The river I swallow runs underground you/the rock in the tide-pool I/the moss that cleaves.’ The speaker-wanderer is here, but not really – she needs the atlas to remind her of the places that still exist, but are long gone.

Editor-in-Chief Anu Mahadev is a left brained software engineer- turned right brained creative poet! Originally from India, she is now based out of New Jersey, with her husband and son. She is a recent MFA graduate of Drew University and a prolific writer. Other words to describe her are dreamer, choir singer, social bee, book and movie addict, avid hiker, lifelong learner and traveler. She writes mostly about love, life and the ties that bind us.