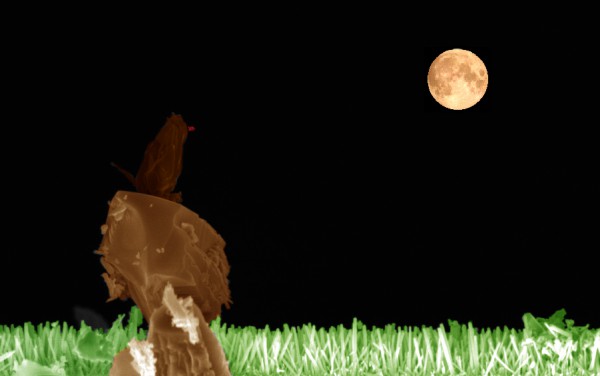 This is a cross-sectional scanning electron microscopy?image?depicting ‘Nano-grass Field’ of zinc oxide nanorods (60 nm average diameter and 1?m average length) grown via hydrothermal route using Zn seed layer. In contrast to the picture which shows the ‘Nano-Grass Field’ at dawn, the highly oriented crystalline zinc oxide nanorods are grown via this low temperature method to be used in sunlight as semiconductor electrode material for dye-sensitized and perovskite solar cells that are emerging as future generation cost-effective solar cells. The ‘bird sitting on the rock’ in the ‘grass field’ is formed of the substrate during the process of sample preparation?for cross-section imaging.?

Won 2016 Best Image Award in the SU2P 7th Annual Symposium – Image Competition under the theme ‘Photonics for Energy and Environment’. 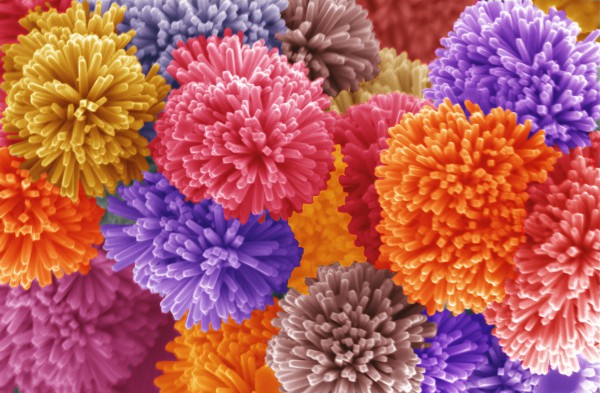 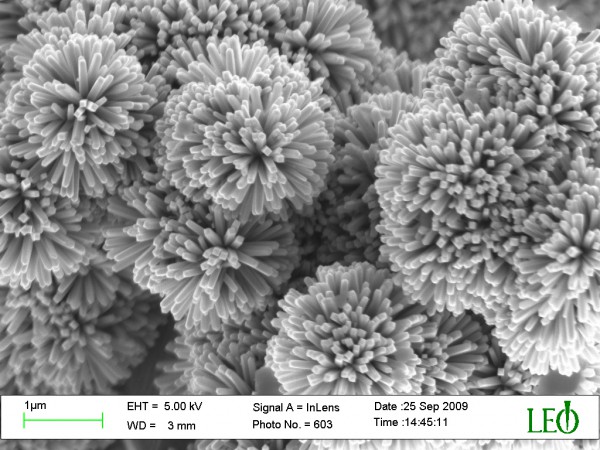 The various colour ‘Dandelions’ in this ‘Floral bouquet’ are the representative of women from around the world – various shades of personality, character and identity! This ‘Floral bouquet’ is a scanning electron microscopy image of tin oxide nanorods grown via hydrothermal method. The dominance of homogeneous nucleation during the growth results in the formation of these ‘Dandelions’. The strikingly extraordinary architecture of these ‘Dandelions’ make them promising candidates for electrode material in energy storage and energy harvesting devices which include new generation cost-effective rechargeable batteries and solar cells.

Won Second prize in the 2011 ‘Nano&Art’ competition (organized by nano4women—an initiative sponsored by the German federal government—invited entries from female students, graduates, and young scientists working in the field of nanotechnology at universities, research institutes and other organizations in Germany and Europe) and sponsored by ‘Evonik’ Industries. 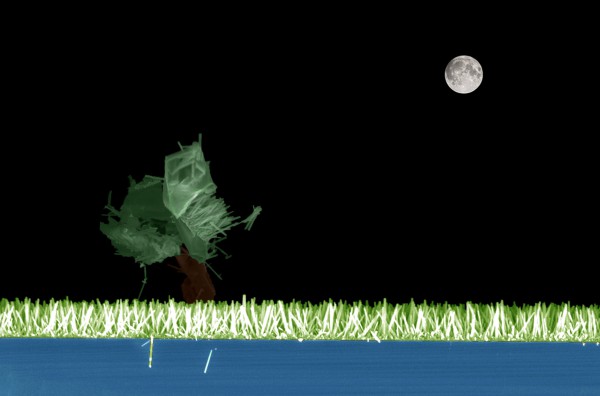 This is a cross-sectional scanning electron microcopy image depicting ‘nano-grass field’ of zinc oxide nanorods (60 nm average diameter and 1?m average length) grown via hydrothermal route using Zn seed layers. In contrast to the picture which shows the ‘nano-grass field’ in bright moonlight, the highly oriented crystalline zinc oxide nanorods are grown via this low temperature method to be used in sunlight as semiconductor electrode material for dye-sensitized and polymer hybrid solar cells that are emerging as future generation cost-effective solar cells. The ‘tree’ in the ‘grass field’ is formed of the nanorod bunches scratched from the substrate surface for transmission electron microscopy measurements. 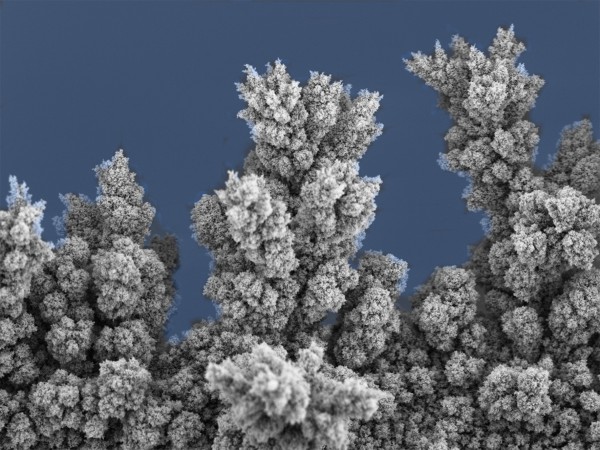 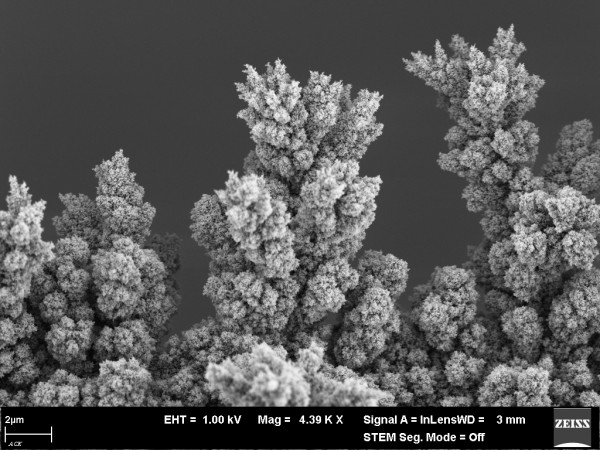 This image depicts the scanning electron microscopy image of ‘NanoCorals’ formed from monodisperse tin oxide nanoparticles of size 20 nm synthesized in gas phase using aerosol route during deposition using electrostatic precipitation on the silicon substrate. The diffusion limited aggregation of the nanoparticles during deposition leads to the formation of coral like structures. The image has been taken ultra-high resolution field emission scanning electron microscope, Zeiss Ultra 55.

Entry in the 2009 ‘Nano&Art’ competition. Selected for nano4women calendar and published in the newspaper ‘The Zeit’

Aruna Ivaturi received her Ph.D (2006) in Experimental Solid State Physics from Indian Institute of Technology Delhi, India with a fully funded fellowship from CSIR-UGC, India. She then worked at the Institute of Nanostructures and Technology, University of Duisburg-Essen, Germany, on the synthesis of metal and oxide nanoparticles for gas sensors. She was awarded the Alexander von Humboldt Fellowship to carry out self-proposed work on the synthesis of rare-earth oxide nanoparticles via gas phase. Thereafter her work at Nanoscience Centre, University of Cambridge, UK, dealt with the growth of metal oxide nanowires for solar cell technology. Her work at Heriot Watt University was focused on upconversion for enhancing solar cells efficiencies in an EU consortium. She has worked at School of Engineering and Physical Sciences, Heriot Watt University and then at School of Chemistry, University of Edinburgh on Dye-Sensitised and Perovskite Solar Cells as a part of UK-India Consortium on Solar Energy Research.

Presently she works at the School of Chemistry, University of Edinburgh with a Scottish SME on Electrochromics for Fashion. Her principal research interests, which lie at the interface between Engineering and Pure Sciences, centre around the development of novel nanomaterials and fabrication of optimized devices for important technological applications in energy and environment sector.

EDITOR’S NOTE: An excerpt from nanoart21.org on the subject of Nanotechnology and Art: “NanoArt is a new art discipline at the art-science-technology intersections. It features nanolandscapes (molecular and atomic landscapes which are natural structures of matter at molecular and atomic scales) and nanosculptures (structures created by scientists and artists by manipulating matter at molecular and atomic scales using chemical and physical processes). These structures are visualized with powerful research tools like scanning electron microscopes and atomic force microscopes and their scientific images are captured and further processed by using different artistic techniques to convert them into artworks showcased for large audiences. – Cris Orfescu”