“Alright, thank you, Mary,” he grunted. He was supposed to have fallen asleep by 11. “Mary, are there any notifications,” he spoke with an effort.

It is thirty-five minutes away.

Roshan slithered out of his sheet, felt for his slippers and, jigging his feet improperly into either, towed them to the only window in the room. Moonlight sifted through gossamer clouds and lit up half the room. Roshan did not like putting on the lights at night, if only for the pretence of order and sleep. 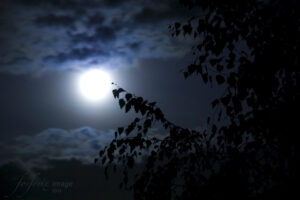 It had rained yesterday and the smell of wet concrete still dithered in the wind. Roshan wished to feel the breeze. The window was outwardly hinged, the new kind with a steel frame that made you wonder if the metal was ever new. He pushed it outward and dropped the latch to hold it from smashing itself against the wall. His socks, awkwardly hanging on the bars of the window, barely moved.  Only a breath or two could enter the room and ruffle the itch on Roshan’s powdered forehead and neck. He had had a bad case of prickly heat ever since the AC hissed away its coolant a couple of weeks ago. No repairman could be reached.

It is also true that Roshan chose to bear the ordeal. He had grown hesitant about moving in proximity with wandering men and women — dhobis, deliverymen, maids and the like — which is why he did not press any repairman. “Better to scrape my skin off with a comb than die gasping for breath in air-conditioning,” he had reasoned to Mary when reminded of scheduled repairs. Although the worst was thought to be over, and people slowly emerged from their homes, hesitant yet to breathe outside air without protection, Roshan was content with living in his flat. His employers were quite content too: this way Roshan worked for longer hours without knowing any better, instead of the old nine-to-five.

As he stood by the window, rivulets sprang from the top of his forehead. The fan whizzed but was not effective. He knew the sweat would worsen the heat on his forehead. He wished to be on the balcony. The only room in the flat with access to the balcony belonged to Mayank, who had agreed to pay a slightly higher rent for the privilege. He was better placed than Roshan, and so had the better deal after settling all monthly accounts. He had put a lock on his door when he had gone home over two months ago. They had not talked since then.

“What is Mayank doing these days?”

Do you mean Mayank Gupta or Mayank Kanojia?

“Well, only one of them used to live here.”

I am sorry, I do not understand.

Roshan dragged his forehead across his arm. His forehead singed under the curls on his arm. “Gupta, Mary. Mayank Gupta.”

Mayank Gupta, @maybeank. Last post one day ago. “Banging plates for frontline warriors. What are you doing?”

“Hmmm. Any messages?”
You have one-hundred-and-forty-three unread messages from two chats.

Riyas was an old college friend of Roshan’s. There had been little contact since graduation, but these hours of leisure over the last few months often proved fruitful to discourse, which somehow always entered the plane of politics.

Roshan walked back to the night stand and picked up his phone. Riyas’s last message at 11:34 was still unread. “But he was killed. By the very people who gatekeep the industry,” Roshan’s text read. “I cannot care if he took his own life or if someone killed him,” Riyas had written before. “He is not the only Bihari who died last week.” Roshan had virtually ignored the latter part of Riyas’s message. He recollected now that his night began in wait of Riyas’s reply. The untimely demise of an actor, with all of its fantastic potential, cloaked the news. Roshan had been scrolling through these news pieces on his phone in anticipation for a reply until some ad for food popped up. This was around the time when the party across the road had begun.

Roshan fancied what it would have been like over there. He had been able to make out some movement through the glass screen door of their balcony. The room was dimly lit with string lights, consistent with the new metropolitan vogues. There had seemed to be no more than five people there. He could make out the shapes of three women apart from the two men who used to live there. He had debated calling the police but what would he have said?

I am not sure what you mean, Rowshun.

“Ah, nevermind. You are too innocent. You don’t know enough.”

“Maybe you can learn it on your own. I won’t teach you.”

Please specify what you want me to learn about, Rowshun.

“See, I wouldn’t have known that.”

I am glad I could be of help.

“Yeah, at least you could do this. Let the rascals have their fun.”

Roshan had continued to stare out of the window, the languid night uninhibited in carrying gossip across the road. After the quintet had drooped and sprawled on the floor and scattered around the sofas, Roshan walked to his dresser and produced a bottle of talcum from a drawer. He shook a little onto his hand and dabbled it around his throat and forehead.

“What is Nikita doing?”

Roshan missed her in that instant. He had not met her since the lockdown began.  After a few weeks of life inside their homes, they had decided to end their acquaintance. They lived three blocks away. He saw her briskly walking past his building twice every day; possibly to get cigarettes at the society’s gate, but who knew? Roshan had been suspicious of her liaisons with that factory owner’s son in the next block. Watching her go by from his window, he would inevitably postpone their encounter to the next day.

“What do you think will happen tomorrow?”

You have a meeting at 10 am. You have told me nothing else on the matter.

“Not that, Mary. You can be idiotic sometimes.”

“Yeah, yeah. Now I need to talk politely to you too. Did you get a new bug now?”

I don’t know what you are talking about.

“Hello, sirji, you had an order?” The man’s words ran into each other such that his sentence sounded like one long word.

“Sir, my motorcycle has a puncture so I am trying to find someone for help. It is hard to find help at this time.”

“Then why did you accept the order if you had a flat tyre?”

“Sirji, I was bringing the order to you when I got the puncture. There is nobody to help at this time. You must understand, sirji.”

Roshan had nothing to add. “Oh, okay,” he said and hung up.

He sat down on the bed and felt his stomach curl around him. “Mary, what did I weigh a month ago?”

“Mary, can you express that in kilograms, please?”

“And a month before that?”

“Thank you, Mary. Can I ask another favour of you?”

“What was that video I was looking at an hour ago?”

You were watching an age-restricted video. I cannot say its title.

Yes, yes, that one. Could you download it for me?

Your phone does not have enough storage.

“You ask too many questions.”

I wouldn’t want to delete anything important. I can delete unused apps if you want.

“Yeah, okay. Maybe some of the newer videos from ‘xyz’.”

I cannot say a lot of the words these titles have.

Roshan turned and looked outside the window again. His body seemed to be shuddering with an urgency, like at the sound of approaching footsteps that never really materialize. He thought about the time left to fill with sleep. He still had to wake up at 8 for his shift. With the home office having lasted for a few months, Roshan found his joys at the prospect of it consistently diminishing. While it meant more time for himself on the first day and a few days after that, the long days teeming with possibilities would spin their promise away and leave Roshan feeling slow. He tried to practice the guitar, left abandoned since high school, but felt the urge to give in just minutes into it.

“Mary, where is my food?” he almost started as the thought finally jerked him out of his reverie.

It is thirty minutes away.

“Mary, why don’t you play something for me?”

“I don’t know. What do people in Britain listen to these days? Americans don’t really have a culture.”

I could look up the UK charts for you—

“Just play something for me, please.”

At number one is—

“Where is this guy?”

He seems to be near the Secretariat.

“How long would it take to get from there?”

Should I call him?

Okay. Can I do something else for you?

Roshan still looked outside the window. He turned and went back to the night stand and sat at the edge of the bed. His phone lay there. “Good night, Mary.”

After the screen went blank, Roshan picked up his phone and switched it off. He looked at the pulsating lights as the animations played out, chiming with a robotic timbre, and then there was darkness and silence again. Roshan stayed there for a moment; he felt an irresistible pull towards the bed but sleep meant inactivity. He felt too enlivened, too nervous to sleep. He would have to sleep some time but he could not do it now, not yet. He walked back to the window, peered out sidelong, and waited to make out the figure of a man on a motorcycle, making the unlit turn from the slums and approaching the society’s gate. 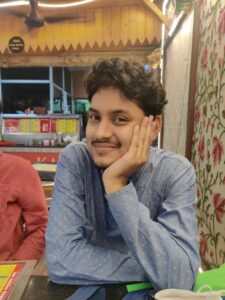 Utkarsh Sharma is a Master’s student of literature at the University of Hyderabad. Fascinated by the role of literature in peoples’ movements, he can be found reading, writing or working for the campus community. He has had his work published in The Hindu, Kitaab and The Alipore Post.