An Interview with Hoshang Merchant 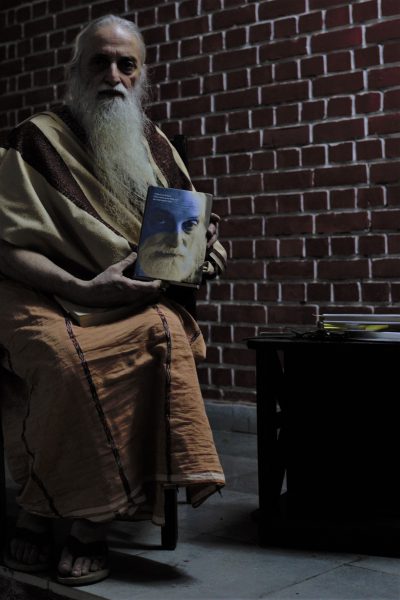 It was a damp Christmas morning in Delhi when I decided to call Hoshang Merchant for an interview. Merchant is a poet, critic, and a retired Professor from Hyderabad. He has written over 20–30 critically acclaimed books of poetry and critical writing. I had recently finished reading his latest published book of poems, My Sunset Marriage, which is a collection of memories and desires, a journey of “forbidden” love, a transition from a boy to a Queen. I had also just read Secret Writings of Hoshang Merchant,a collection of essays ranging from literary criticism and commentaries to memoirs, musings, impressions and observations. Secret Writings is political and public, yet intensely personal. Merchant, belonging to a generation of Anglophone Indian poets, is a retired professor of English Literature, a homosexual man who is notable for coming out publicly, the editor of Yaraana, the first gay anthology in India, and the author of several books. In this interview, Merchant reflects on his life today. How does he live in a society where intolerance is on rise? How does he live in his lonely apartment in Hyderabad? What are the secrets that still reside in the heart of this prophet-poet who writes about love? A Christmas morning was perhaps the best day to talk to him about rage, loneliness, love, and hope.

Gourab (G): Merry Christmas Hoshang! How are you?
Hoshang Merchant (HM): Thank you! Same to you. I am good.

G: Any plans for Christmas?
HM: I had my Christmas two days back. A lady took me out for a nice lunch. I ate a lot. I also met the brother of my first lover in Hyderabad, who recognized me and was continuously calling, whom I ignored. How can I like him? Married, corrupt and scheming.

Merchant is a beautiful man with a long, white beard and long, white hair. He now walks with a stick after a knee surgery. He does look like a prophet. Those were painful days, when his lovers left after robbing him, when he was alone, and when his colleagues did not show up when he needed them.

G: Are you a lonely person, Hoshang?
HM: I live alone, but I am surrounded with my students, artist-friends, poets. I love Hyderabad.

G: What is loneliness to you?
HM: There are three kinds of loneliness. Sexual loneliness; it increases with age. I still attract young [men], who exploit me. I also attract middle-class men, who exploit me for my pension. I do not want to die lonely and exploited, like the gay guy in Vasant Vihar. Then there is social loneliness. Local poets and artists, who have taken care of me for more than thirty years, are my friends, like my students. I was operated [upon] and they attended to me in the hospital, not my colleagues. My professional colleagues make me socially lonely, if I have to think like that. I desist from social ties with them, [but] I love my students, I love my friends. Then there is intellectual loneliness. I still write. I love writing; it is like living. I am blessed to have traveled and lived in America, Germany, Iran, Palestine, and other countries. I have known the poetic traditions in Urdu and Arabic. I have learnt what love is.

G: What is love to you?
HM: Love is suffering. It ends with sacrifice. Love is young, too.

G: Is this the essence of your book, Secret Writings of Hoshang Merchant?
HM: Maybe … the reader needs to understand it.

G: What is the meaning of “secret” in this new book?
HM: Secret in writing is like secret in poetry. One has to understand the suffering. I am a writer and not a preacher. The reader has to find the “secret” from my writing—not a sermon, but a deep meaning in the poetry, which has rich literariness, sensitivity, and suffering.

Hoshang Merchant edited an anthology of gay writing that came out in 1999 titled Yaarana: Gay Writing from South Asia. It gave a literary platform to many queer voices of the Indian sub-continent. Yaraana: a bond of brotherhood, a string of friendship and a relationship that means being sensuous and sensitive to each other. It was a sparkling moment in the history of queer struggles in India. Merchant became a gay icon, drawing both criticism and love.

G: Why did you think of publishing something like Yaraana?
HM: I wanted to write the secrets of an Indian gay world, the knowledge that I picked up in the gay terrain of 1960s Bombay. I wanted to shape the literary world of the gay writings of India through this anthology.

G: Yaraana has many old and new voices, expressing the angst, love, guilt, betrayal and hope of gay men. How do you feel about this when you look back?
HM: Yes, it has voices from across the country. I learnt of queer politics, queer aesthetics, queer struggles of India through gay men’s writings. While working on it, I also had differences with established poets who thought they could teach me how to shape an anthology. I kept quiet. I do not hurt anyone. I never did. I waited for Yaraana to come out. It gave a platform to so many gay men to come out through writing. Writing becomes a political tool for them to come out of the closet. This is the success of this book.

G: Yaraana recently came out as a second edition. How do you feel about that?
HM: I am happy. When it came out first, lot of lesbians got the strength to come out, write, express [themselves] and fight. A man called me and said that he was going to commit suicide, but he read Yaraana and changed his mind. This is what a good book and honest writing does—it instills hope and dreams to live on.

G: In your writing, you often mention almond trees and peacocks. Any particular reason?
HM: They are symbols of love. When I was in Iran, I watched Eurasian films. They stopped showing Hollywood films. Those films were about the mountains, people, villages, love. Garden of almonds, peacocks flying, blue sky … the beauty is engraved in my heart. Moses received sermons from God under the almond tree. It is holy, like olives; it is love.

G: Do you still love watching films?
HM: I still watch films. But I do not go to [cinema] halls. Students bring DVDs and I watch films at home. Thirty years ago, I used to go to the cinema halls in Hyderabad. I used to dance in the lobby during intervals.

G: Who is your favourite heroine?
HM: Meena Kumari. So much of suffering. She suffered so much. I used to see her during my childhood in Pali Hill when she visited my neighbour. She died crying.

G: Who was your favourite hero?
HM: Raj Kapoor. I used to close my eyes when Raj Kapoor used to kiss Nargis. I used to imagine myself as Nargis.

G: Who do you like now in Bollywood?
HM: I like Ranbir Kapoor. I wish him to be my boyfriend.

G: Do you believe in monogamy or fidelity?
HM: I am one-man bitch, like Elizabeth Taylor. I cannot have two lovers at the same time.

Merchant is like spring in the garden of almonds. He makes fun of others; he makes fun of himself. It is difficult to laugh at oneself. He does it with élan. His close association with Anaïs Nin educated and shaped him. He learnt to be compassionate and resolute. He is a kind person. He had many lovers. Most of them betrayed his innocence. Most of them spoiled him. Most of them robbed him. But he has not stopped loving. For him, loving is living, and living is writing.

G: Who is your favourite poet?
HM: Many. But I love Agha Shahid Ali.

G: Who are your companions?
HM: I like to be in the company of young people. They know how to admire. I also like the company of cultured and aesthetic people.

G: Are you a spiritual person?
HM: I am.

G: Do you follow Zoroastrian teachings?
HM: Zoroaster said not to lie. I have never lied.

G: What about Hindu gods?
HM: I like Shiva. I like Krishna too. I like Vishnu when he is Mohini. I do not like Tiruputi, he was worshipped by my first lover. I did not get him. His god did not give him to me.

G: Do you want to undo the history of your life?
HM: History cannot be undone. History can only be transmitted through wise living. We must have faith in humanity and we must love life. I have earned my wisdom through love and writing:
The seasons are always
Always changing
Snow spring appletime summer
Lovers go searching a bird
And the bird a hunter.

(“The Boy Who Followed Birds” in My Sunset Marriage)

Gourab Ghosh has completed his MPhil and MA in English Literature from the Centre for English Studies, JNU. He is a LGBTIQ+ rights activist based in Delhi and writes political pamphlets, essays and poems related to left politics, queer activism and love. He is currently working with Sahapedia and helps in developing and designing projects related to practices and rituals, performing arts and histories.
Photo credit: Chiara Goia, 2013.