For the last few months I’ve been carrying my mother and father around with me in two galvanised trunks. I’ve moved into a new/old house in a new/old city, and there’s nowhere else to store them. Someday, I hope to move them into sturdy steel cupboards, safe and secure, away from pests.

Upstairs, my husband has a packed roomful of his father’s family and work life. There are trunks and trunks of the stuff. Then there are things his sibling has secreted away in her own sturdy metal boxes. There are two cupboards that hoard documents and a massive sideboard whose doors I don’t have the courage to open because I don’t know what might tumble out. A peek tells me that it’s wires and cords that must have been attached to some obsolete electronic item or the other, then there are more photo albums, more paper and other remnants of past lives; plastic sackfuls of important memories that won’t reveal themselves no matter how hard you stare at them or how long you think about them. What is this piece of paper with these numbers and names scrawled all over it? Can’t imagine what but I’d better keep it anyway, just in case; just in a case; just in cases. 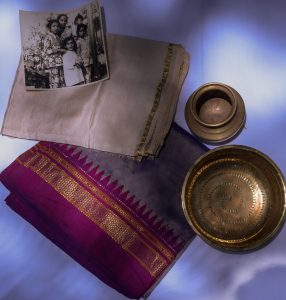 I too have my share of just-in-cases. Not too much but just enough to make me pause and ponder every now and then. What is this diary with all these mail ids? I don’t recognise any of the names but I’ll hang on to it because who knows. Then there’s a folder full of yellowed and torn off pages from here and there. They must surely be important, that’s why I have hung on to them for so long. At least I try to confine myself to folders (nice cloth-covered ones) and paper bags (plastic is not for me and so bad for the environment).

There are some photographs in the trunk where my parents are stashed. I carefully selected them from albums and stacks that were thrown open to their daughters after they passed—so soon, one after the other, barely two months apart. I grabbed at them greedily and picked out as many as I could so that I now have duplicates, even triplicates. I prefer the monochromes over the colour, of course. More aesthetic and, well, aged though I cannot seem to recollect the contexts at all. Even in the ones where I’m there, I’m too little to recall anything about names or places or why the picture was taken. But it’s great that I have these photos with me now and the thought that they are all safe in that steel box is comforting. I’m not sure how much time I’ll be able to devote to them from here on but at least I have them to go back to and revisit them never.

In my husband’s case he lost both his parents when he was barely out of his teens so he’s been hanging on much harder, much longer.

Why do we find it so difficult to let go of the past and why do we memorialise the material? Speaking for myself I don’t think I’d like to live on like that after I’m gone, as big and small  objects tucked away in cupboards and other lonely places. And now that I’m here, in this old house I don’t know how to reconcile material memory with hazy images from my past.

I used to live in this house, this city, twenty years ago. My parents lived upstairs, helped me take care of my children, a three-year old and a newborn. I’d fought postnatal depression, not knowing that there was such a thing as that, struggled with being home-bound, having my life scrutinised, criticised; I had strived to be there for my children even as I tried to sustain a fledgling attempt at freelancing. Every now and then I staged small acts of rebellion: went off to watch a film with friends; refused to make myself available to guests; passed like a ghost through days filled with silence, not wanting to talk to anyone at all. 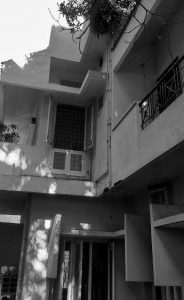 And now, here I am again. Memories, long buried, hit me in waves everyday—at times I frolic in them, at others I go under. Sometimes it’s not even moments and scenes that I recall, but emotions and feelings that linger like a bad aftertaste. I’ve had relationship-altering quarrels here, altercations that reshaped the course of my life, leaving me with changed perceptions of myself and others, and a pain so deep that it stings even to glance at the empty apartment upstairs.

I usually avoid going there but when I absolutely have to, I walk through the empty rooms briskly, shaking off the sounds of old voices calling and babies crying, of gentle admonishments and harsh scoldings, of hysterical laughter and uncontrolled tears, of whispered remonstrations and shared sorrow. Images bounce off the walls like I’m watching someone else’s life play out. In the shadows I see my father loading the washing machine, watching over workmen cleaning the sump, walking off to the shop; my mother calling from the balcony to switch on the motor, summer sweat clinging to her face, a baby to her hip; a sister leaving for office, face set and aloof, uniform impeccably ironed; a little girl getting ready for her first day at school, standing obstinately in front of her grandfather, refusing to hand over the remote while Cartoon Network blares in the background; a baby crawling around with a piece of chalk, drawing many-legged insects all over the floor (“Poochi poochi,” he mutters in delight).

When I return downstairs I dig through the photos in my mind and look for the people who are no longer there. But the faces I see are not my mother’s and father’s, withered and grey. The people who lived upstairs, I must have known them and they me, but I see only strangers. And now that they are gone, I feel I am a stranger too. 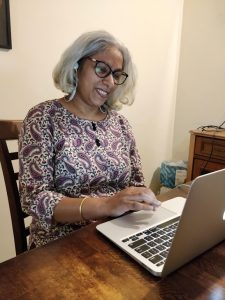 Revathi Suresh is the author of two novels about young people, Jobless Clueless Reckless, and its stand-alone sequel In Now & Then. She’s an avid reader of detective fiction, and when she’s not chasing villains and murderers via her favourite crime novels, she builds stories in her head that she tells to herself at bedtime. Her writings, reviews and stories have appeared in The Hindu, Deccan Herald and The Bombay Review.