A Moveable East by Siddharth Dasgupta

This book is a heptaptych of a vividly viewed life, pre-existing in memory to the conscious tick of time. 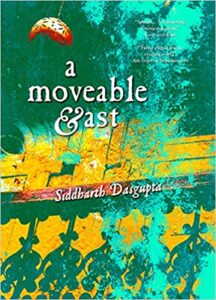 Siddharth Dasgupta in his new collection of poems, A Moveable East has seven stopovers of rolling existence from Hunger to Flame, Sorrow to Melody, Desire to Horizons, to finally Home like a catchment of self-conversations that appear to be a murmuring jugalbandi of hypothesis, memory conspiracies of a musafir declaring sensory associations under green channels of mind travel.

Dasgupta switches back and forward between cafes and courtyards, promenades, and footpaths to the past and present, oscillating melodiously between milieus infused with a deep quest that we all have for the truth. A truth that is sometimes found in accidental glimpses and sometimes stares so nakedly back at us in stark light to be rendered invisible. ‘There used to be a bookstore here once./ It lingers, still, like the negatives of a dream.’ Some of his poems are ways of penance and atonement, hovering over seething epiphanies, some are peans of love and yearning, and still some are records of fruition and power, corruption and courage, prejudice, aging, decay, celebration and recovery. These, grasp and integrate an overturned and shattered world in a manner of cascading stanzas.

‘a place that reminds you of / the melodies you have known…’

Many poems in the book embody geographic places and people of real and imagined days like the Maqbools and Abdul Chachas, of eras of Persian, Byzantine, Turkish, maritime, Paris, Karachi, Cairo, Beirut, and Kerala. Dasgupta’s memory is syncretic in its delightful nurturing from expresso bars to expressive citizenry. And like an enriched vocabularist, he possesses that singular appreciated quality of transporting an escape also, through the willful embellishment of language. ‘Quay and wharf and pier and seagull disarray—’ where only sometimes one fears that linguistics might threaten to eclipse the imagery.

Immersed, thence, in a collage of imagery and sensoria, these prose poetry texts become sublime hints to the reader in re-doubling, relooking, retaking moments of existence. Like living it twice or seven times over. ‘I remember gladioli. The far-off scent/of regret; our small towns lake dappled/with the embers of small town fate.’

While journeying through various metaphysical cities, nostalgic with associations of calligraphic letterings, the poet’s descriptive prowess features in tones of regret, ache, torment, flux, and a Rumi-eshq thirst, as smithereens of his fragmented selves implode under homes of roofs we generally call: poems. ‘Your prayers resonating with the silent echoes of dissonance.’

This book is an oak tree finding the capillaries of its ancient roots, as the poet vacillates between longing and belonging, bringing home dystopic utopias fractured in realism – a cubist way of exaggerations and disintegrations. Sensory openings to temporal landscapes in self-aware significance of intricate introspection.

Each poem relies on a paradoxical bedrock of uncertainty, honesty, and vulnerability, equaled by an undercurrent desire to re-remember amid world instability, that which is lost to time, in an aim to glean retrospectives on truth. Dasgupta is a happenstance philosopher, escape artist, hesitant survivor, who plays with ephemerality as he curates the world to the utmost and outmost with a photographic memory, building a quivering pack of imaginative cards, Houses of dreams, alongside monochromatic photography to blend with mood and atmosphere. ‘An old city an instant hush, wrapped in the/alchemy of jade, of mosque, musk, and prayer.’

And like a tumbled bag of marbles uncovered at the centre of a table, these poems roll off centre to the gravitational pull of a reader’s reckoning. ‘Hunger inciting a literature/scripted for prodigal and poor.’

With sharp impressions of memory and identity, and a resolute memory that pushes through the debris of time; this book and the poet become a relentless witness that does not submit or overlook the ruins of the mesmeric past that lurks behind the quotidian present.

The poet hones escape portals taking flights himself with us along. 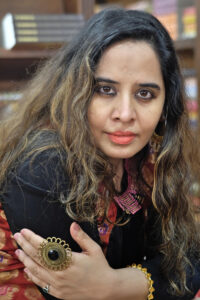 Fictionist | Poet | Critic | Curator | Editor | Translator | Screenwriter, Rochelle Potkar is the author of Four Degrees of Separation and Paper Asylum that was shortlisted for the Rabindranath Tagore Literary Prize 2020. Her poetry film Skirt showcased on Shonda Rhimes’ Shondaland. Many of her stories and poems have won awards.