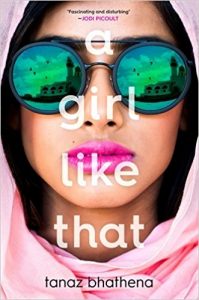 Tanaz Bhathena’s first novel A Girl Like That narrates the story of sixteen-year-old Zarin Wadia, growing up in Jeddah with her adoptive aunt (masi) and uncle (masa), and struggling with the ordeals that life throws at her. The novel explores how Zarin’s adoptive family, much like the adoptive city, never quite accepts her as one of their own – she remains a perennial outsider, in her house, at school, and in Jeddah at large. Even while recounting her reckless adventures, the novel never stops underscoring the loneliness that informs Zarin’s excesses. Intelligent, witty, and sharp-tongued, Zarin Wadia finds her gossip-peddling classmates retrogressive, her boyfriends overbearing, and her family, tyrannical. The love child of a Hindu gangster father and a Parsi bar-dancer mother, both of whom are killed shortly after she is born, Zarin appears to be the outsider in every sense of the word. There is no place, community, or person in Jeddah that offers any comfort to Zarin. In other words, her isolation has a terrifying completeness about it. Till she meets Porus…

The writer Bhathena, born in Mumbai, and raised in Riyadh, Jeddah, and Toronto powerfully captures the experiences of loss, marginality, and exile that are embedded in Zarin’s diasporic identity. Unable to fit in with the customs and practices of the society she finds herself in, Zarin longs for a space where she could be herself, as much as she longs for love that would accept her as she is. That is perhaps the reason as to why Porus Dumasia, her Gujarati-speaking, Parsi friend from India, who she runs into in a cheese-and-meat deli, is the only character in the novel that Zarin can turn to, the only one who can penetrate the walls of her loneliness. The destination-less, long drives with Porus that Zarin begins to look forward to are a reminder of the limits of the city, of its lack of any sanctuary for a young couple, and of Zarin’s search for her own safe corner in a the city. Porus, with his ties to India, his fluent Gujarati, and memories of a shared childhood with Zarin in Cama Colony (Mumbai), reminds her of home, or at least her imagination of home. Porus brings together Zarin’s nostalgia for home, and her desire for love, in an attractive and accessible package.

Indeed home and love are two continuous themes in the novel. In spite of the main drama unfolding in Qala Academy, the school attended by Zarin and her friends, all the key characters – Porus, Abdullah, Mishal, and Farhan- are shaped by their experiences with their parents and siblings. In each of their stories, there exists a constant longing for love and recognition from their family which, when thwarted, finds alternate and often disruptive ways of satisfying itself. The bright, good-looking Farhan, for example, takes to molesting and raping women possibly because he unconsciously attempts to emulate his father who he once walked in on copulating with the maid. Mishal, similarly, unable to handle the hostility of her brother and the indifference of her mother, turns vicious towards girls who appear defiant in any way. The novel describes how disturbed familial bonds further confuse and injure the young adults who are barely able to cope with their own exploding emotions and changing bodies. Broken homes and loveless families that fail to nurture relationships become prime reasons for deviant behaviour in the adolescents of the novel.

The first person narrative, allowed to each of the main characters, adds motives, perspectives and insights to the other stories and makes the novel delightfully layered and complex. Abdullah’s hypocrisy, for example, is revealed through his behaviour discussed in the accounts of Mishal and Zarin. While Mishal’s narrative describes Abdullah as an over-protective, concerned, and conservative older brother, Zarin’s account shows him chiding her for being a prude when she refuses to let him unhook her bra. Musings, speculations, and confessions of the characters are interrupted and contradicted by alternate, often conflicting stories by other characters, ensuring that the reader is always confronted with multiple perspectives. The narrative style allows the reader to register the ramifications of words and actions of one character through the impact they have on other characters in the novel. It is through Porus’ narrative, for instance, that the reader gets a glimpse of the extent of his love for Zarin and his disappointment when she initially rejects him.

However, despite the engaging narrative design and the racy language, the novel in many ways remains a cliché. While the insolent, spunky Zarin Wadia is appealing to the reader, she is also like numerous other sixteen-year-olds encountered in the high-school-drama segment of popular film and literature. In fact, it would not be unfair to say that in terms of the plot, Bhathena rehashes almost every cliché in the book – the distressed teenager with an abusive family indulging in self-destructive behaviour, classroom wars, falling for the local heart-throb who turns out to be a scoundrel, appearance of childhood friend to rescue the damsel-in-distress, and the girl who finds true love in her dull friend. For readers even briefly exposed to this segment, the plot of the novel will remain its major weakness. It is indeed difficult to tell a story about the promise of eternal love driving teenagers on in a non-hackneyed way, given the universal appeal and prevalence of this theme.

Where the novel deviates from the conventions of this sub-genre is in its denial of a ‘happily-ever-after’ to the protagonists as well as the readers. Far from even hinting at such a conclusion, the novel, in fact, opens by establishing that both Zarin and Porus are dead in a car accident – yet speaking to each other and attempting to hold on to each other even after their bodies are lifeless. It is in these opening pages that the reader gets a sense of Zarin’s acerbic wit, Porus’ simplicity and devotion to Zarin, and as the scene unfolds, the laws of the land that forbid all romantic relationships if not institutionalised by marriage. From this point, the novel moves back in time, revealing the story of Zarin’s life in fragments.

The fresh, outlandish opening of the novel that shatters the usual expectations associated with this sub-genre and foregrounds its narrative design, is definitely one of its highlights. The unusual setting (Jeddah) which plays its part in regulating interactions between opposite sexes, restricting desire, and curbing love along with the protagonist’s complicated relationship with her context woven into a narrative about love and longing are some other aspects that make A Girl Like That an equally entertaining read for fans of high-school literature as well as the uninitiated reader.