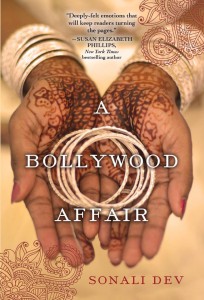 “All Mili had ever wanted was to be a good wife. A domestic goddess-slash-world’s-wife-number-one-type good wife. The kind of wife her husband pined for all day long. The kind of wife he rushed home to every night because she’d make them a home so very beautiful even those TV serial homes would seem like plastic replicas.”

As an avid reader of romance novels who also enjoys Indian films, I was instantly drawn in by these first few sentences of Sonali Dev’s debut novel, A Bollywood Affair, intrigued by the promise of a story that appeared both dramatic and humorous with a decidedly filmi tone to it. As I went on reading, I was happy to note that the novel does indeed live up to this promise.

The novel begins in Rajasthan, during an Akha Teej mass wedding ceremony with the marriage of a crying four-year-old girl to an indifferent twelve-year-old boy. The set up grows more intriguing when said four year old girl, Malvika a.k.a. Mili, is comforted by her husband’s younger brother, Samir, a boy with obvious Caucasian heritage – a boy who is beaten by his grandfather for touching his future sister-in-law.

“Get him out of here, [the boy’s grandfather] hissed…

In this single, powerful scene, Dev foreshadows the direction in which the story will move, without trivializing the social evil of bal-vivah, giving this romance novel a surprisingly literary flavor. After the wedding, Mili loses all contact with her husband. Raised by her aging grandmother, Mili remains entirely devoted to her husband. Virat, now an air force pilot, has outgrown the memory of his child bride and is happily married to another woman, who is now pregnant with his child. Mili, utterly unaware of the romantic developments in her husband’s life, is determined to win him over by getting an education and “modernizing” herself – transforming herself from a small town girl to city belle. For this, she moves to Ypsilanti, Michigan, to earn a degree in women’s studies. A letter is sent off to Virat after Mili leaves, outlining in no uncertain terms that Mili, his wife, is waiting for his return. Meanwhile, in Mumbai, Samir is now a director of Bollywood films with a severe case of writer’s block and a firm bachelor, a man who changes girlfriends as frequently as he changes his own socks. When Virat worriedly reveals Mili’s letter to Samir, the latter decides to pay this so-called “wife” a visit and force her to sign the annulment papers.

What follows is an insane first meeting between Samir and Mili, involving mistaken identities, a battered yellow bike, and Mili jumping off the balcony of her apartment building superwoman style only to crash into a tree and break her ankle in the process. In typical romance novel fashion, the attraction between the hero and heroine is instantaneous, though (as it would be in typical Bollywood fashion), neither of them act upon it for a very long time. Samir, who pretends to be a new tenant in Mili’s apartment building, decides to keep his identity a secret and stay in Ypsilanti a little longer when he discovers that Mili’s presence might somehow just be the cure to his current writer’s block.

As the novel progresses, Mili and Samir grow closer, bonding over Mili’s fondness for Samir’s cooking and the craziness surrounding Mili’s Punjabi roommate eloping with a South Indian man, culminating in an extravagant wedding styled after a Karan Johar film. While Mili’s beauty and naiveté initially draw Samir in, her determination and curiosity forces him to face up to a major aspect of his past. Samir, on the other hand, forces Mili to question the legitimacy of her marriage to Virat, making her ultimate discovery of his deceit all the more heartbreaking. While Mili’s propensity to burst into tears at any given point in time can get a little annoying, that quirk is effectively used to create poignancy at the climax of the novel.

It would have been easy for Dev to shy away from exploring the novel’s heavier themes, by relegating the issue of child marriage to the background once it served its role of triggering the initial conflict in the story. Yet while the overall tone of A Bollywood Affair remains light and witty, the author has been careful to portray the emotional and financial difficulties Mili faces due to her child marriage. This is specifically revealed upon discovering the role an older family member plays in exploiting the marriage, nearly forcing Mili and her grandmother into destitution.

At a time when most writers from the subcontinent are striving to shed the clichés in South Asian literature (peacocks, paisleys, mangoes, and most definitely Bollywood films), Sonali Dev wholeheartedly embraces them, cleverly adding an Indian tadka to the virgin-heroine-meets-rake-with-heart-of-gold trope. Apart from witty word play, the beauty of Dev’s writing lies in her ability to give heart to her story and its characters. I couldn’t help but root for Mili and Samir to find their happy ending. Humorous and filled with emotion, A Bollywood Affair is what Indian viewers would call a paisa vasool entertainer and a delightful read.

Tanaz Bhathena writes Middle Eastern and South Asian fiction. Her work has appeared in numerous journals including Blackbird, Room Magazine and Asia Literary Review and is forthcoming in Himal. She has recently completed a novel with funding from the Ontario Arts Council.