Trekking Across the Borderlands 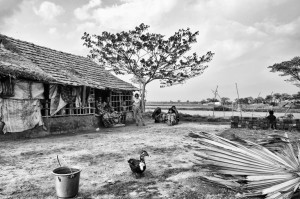 Children in the village of Panitar, near the India/Bangladesh border – photo by Suchitra Vijayan

Borders are fluid and permeable spaces, something Suchitra Vijayan rediscovers as she treks across the 9,000 mile frontier separating India from its neighboring countries: Pakistan, China, Burma, Bhutan, Nepal, and Bangladesh. Inspired by her time spent researching and documenting stories along the Afghanistan-Pakistan border, where she was embedded with the U.S. Army, Vijayan has embarked upon a much broader, extensive project:

I want to commit to these children of predicament, a new breed of people and the ideas that created them, but also the ideas of belonging and identities they have spawned since. The state abstracted discourses of citizenship, sovereignty, and territoriality versus the reality of living. I have decided to embark on a 9,000 mile journey, an archaelogical pursuit in search of these stories. . .

In many places, borders become irrelevant as inhabitants cross from one country to another to visit a mosque, all the while revealing the sometimes arbitrary nature of nation-states. Vijayan’s multimedia project was recently featured by Public Radio International’s “The World.” Although she’s currently raising money to help fund her project, Vijayan will be returning to India shortly to continue collecting these stories of longing, migration, loss, and regeneration. More photos from her travels can be seen here.

From: Blog
← Handmaidens of the Home
Imaging the Other →
Follow Us